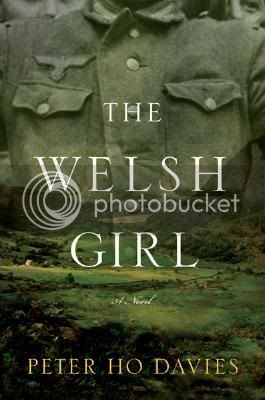 It seems this book wasn't what I thought it was about, but that was just fun.

It's a book about 3 people, even though it focuses mostly on 2 of them. First there is a Jewish captain who is sent to see if Rudolf Hess is crazy or not. He is being held prisoner in Welsh. Then there is the main focus of the story, Esther, a 17 year old Welsh girl. She works in the local pub, and she longs to see more of the world outside. She meets a soldier, Colin, an English soldier who is there building a POW camp.

It's also the story of a German soldier, we meet him before he was capture and learns why he went to war. And then he end up in a Welsh POW camp.

Rooted in the story is the word cynefin, it has no English meaning. It has to do with the sheep, they know where to stay on the hill and never venture further. The know where they belong. It's seen through out the novel, Esther wants to escape, the Jewish captain who's mother is Lutheran and he is too, still he had to flee. And he keeps saying he is not Jewish. And at last, Karsten, the POW, who ordered his men to surrender to save them, and is troubled by this.

There is also the nationalistic angle in this book, the Welsh frown upon the English that is everywhere and they can't even write letters in Welsh cos the censures can't understand it.

It's a good book, I read it easily and I wanted to know what would happen. It was very well-written, but even if I didn't love the book it was worth reading

Not that I so much about Rotheram, the Jewish captain but he was an interesting character. He started and ended the book. I did like Esther, I felt that I could understand her and her doubts. And I even liked Karsten. It's not a book that points and says he is the bad guy, no they all have faults, and they all have those things that make you understand them. He has managed to capture something genuine in this book.

I will give the book a 3/5, because even if it was a great book, I felt it was just ok. Worth reading yes, but that all depends on the person reading.