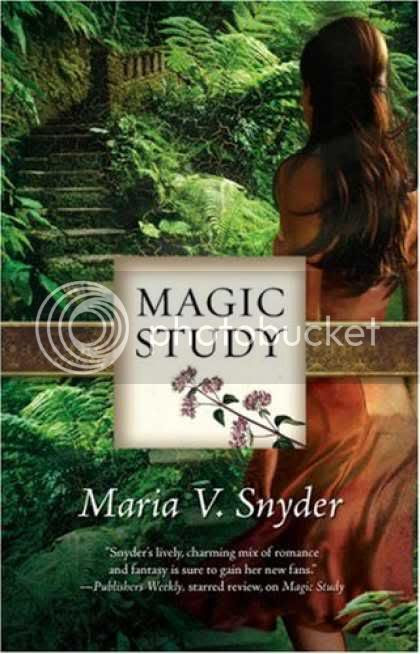 You know your life is bad when you miss your days as a poison taster . . .


With her greatest enemy dead, and on her way to be reunited with the family she'd been stolen from long ago, Yelena should be pleased. But though she has gained her freedom, she can't help feeling isolated in Sitia. Her Ixian background has changed her in many ways -- and her newfound friends and relatives don't think it's for the better .
Despite the turmoil, she's eager to start her magic training -- especially as she's been given one year to harness her power or be put to death. But her plans take a radical turn when she becomes involved with a plot to reclaim Ixia's throne for a lost prince - and gets entangled in powerful rivalries with her fellow magicians.

If that wasn't bad enough, it appears her brother would love to see her dead. Luckily, Yelena has some old friends to help her with all her new enemies .
I did like this book, perhaps not as much as book 1 but that is often the case. It was a great start to a series. This one is a bit lighter in its tone, and even if it deals with some dark things it feels more YA and safe. Let's see if I can get some darkness in book 3.
Here Yelena is back in her birth land, and she remembers nothing. She finds her family in the jungle and soon she is too leave and go with Irys to the Academy of magic. Here she is to learn about her powers. But she soon finds herself in trouble. Her brother hates her, and everyone else sees her as a spy from Ixia. She really does not have any friends, but she does have a way of finding her way anyway.
She does have a way of making enemies and friends, oh my now I really see what Aarti from Booklust meant. Well I shall not mention it any more, but she does have a good point.
The romance was a bit lacking here, and I did find one thing strange. In the last book she and Valek discovered they loved each other. It went pretty quickly, bit too quick. And here when they finally met again he kept calling her love, and she never did say anything. Bah, who am I not to believe in sudden love and soul mates. Good for them. She sure needs a strong man and that she got. He needs a good woman who can keep him on his toes. And she does get into a lot of trouble.
I got to meet some favs from the first book and some new favs, like her horse. Trust me, it's a good horse.
This book deals with magic, finding yourself, and fighting for what you think is right. She finally gets a real family, but I do wonder. More things are to come, more problems with her magic and especially with her lover. All of Sitia hates Valek since he kills everyone with magic in Ixia. That part I have a problem with too, how can these parts get a nice ending? I guess she will go back to Ixia with him, not that I am too fond of Ixia either. I don't like the military dictatorship they have over there, and Snyder seems to be preferring it cos Sithia has beggars and Ixia has not.
But it was a good book, I could not stop reading and it was an easy and light read. I liked it a lot. Snyder creates good characters and worlds.
Blodeuedd's Cover Corner: There are many different ones but this cover series is my fav. They are beautiful, and this one really shows the second book for was it is about.
Reason for Reading: My own Book.
Final Thoughts: 4 and with a recommendation for reading this series.
Blodeuedd at 19:34
Share