Review: On The Edge by Ilona Andrews 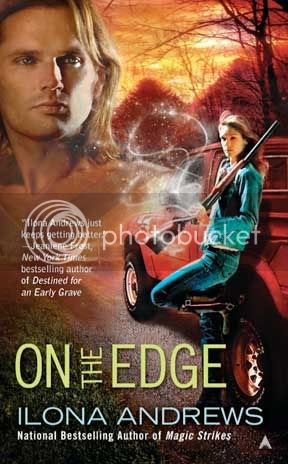 On The Edge by Ilona Andrews

Rose Drayton lives on the Edge, between the world of the Broken (where people drive cars, shop at Wal-Mart, and magic is a fairy tale) and the Weird (where blueblood aristocrats rule, changelings roam, and the strength of your magic can change your destiny). Only Edgers like Rose can easily travel from one world to the next, but they never truly belong in either.

Rose thought if she practiced her magic, she could build a better life for herself. But things didn’t turn out how she planned, and now she works a minimum wage, off the books job in the Broken just to survive. Then Declan Camarine, a blueblood noble straight out of the deepest part of the Weird, comes into her life, determined to have her (and her power).

But when a terrible danger invades the Edge from the Weird, a flood of creatures hungry for magic, Declan and Rose must work together to destroy them—or they’ll devour the Edge and everyone in it . . .

I really enjoyed it this book. It was fast paced, it got witty, it had such a great kick-ass heroine and an world I longed to explore. I was quite taken.

The world is not what it seems, there is our world, The Broken, the place between called The Edge and then there is The Weird were magic roams free. Some people in our world know about these other two, on The Edge there lives people with some magic and The Weird is just filled with it.  Rose lives on The Edge, she is poor, and hankering to get food on the table and gas so that she can get to her job in the Broken. She also takes care of her two little brothers. Most Edgers are poor as her, but it is still better then The Broken since there is no magic there.

Along comes a guy with a sword, and well she knows better then talk to Blue Blood noblemen from The Weird. They think they can rule and everyone will do as they say. Let's just say that Declan and Rose does not see eye to eye at first. But strange creatures are coming into The Edge and she does need him, just as he wants her, and her magic.

I really like Rose, she has the world on her shoulder but she still has hope and a smile on her face (well sometimes, that is around those she care for). She loves the boys, and I liked them too. They are adorable and perfect for the book. She can be kick-ass if she wants to, living on The Edge has shaped her that way because she has not had an easy life.

Declan well, I had to warm up to him since he was all macho Blue Blood at first, but I warmed to him and kept hoping for some kind of HEA and romance.

There is also some much history about he family, about the Weird, and I found it fascinating, I would like to have know even more. But I guess we will get to in later books.

It also had some great quotes, that one about wallmart and guns, well a classic. But this one showed another part:

"Georgie, stop trying to resurrect the shoes. They were never alive in the first place."

I do like that she has some hint of humor in there too.

It has some nice action, and I can seldom say this but I absolutely loved the end. It was funny and fitting the book. And it does promise more and I can't wait.

Blodeuedd's Cover Corner: Love it, Rose against that car is so her. Big towering head I am not so sure of. I would rather have seen him towering around with Blue Blood clothes cos now he is just there for show.

Reason I read it: My own book

Final Thoughts: 4, and I do recommend it