Review together with Aarti from Booklust: The Kingmaking - Helen Hollick 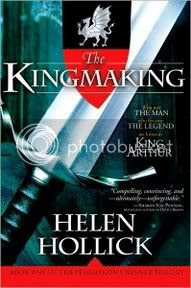 The Kingmaking by Helen Hollick


Pendragon arrives at Gwynedd to ally himself with Cunedda against the tyrant Vortigern, but is slain in battle. A boy, Arthur, is revealed as his son, but he must bide his time. Not until the Saxons plunge the country into chaos is he able to claim the kingship and his love Gwenhwyfar as his.

This review is a bit different, I read this book at the same time as Aarti from Booklust, and we discussed the book together. The review came to be in form of some questions and is in 2 parts, the first part can be found on my blog and the second on her blog (later today.)

Did you like this more realistic version of Arthurian legend?  Did you miss seeing some of the more traditional aspects of Arthur's story?  I.e., Merlin and Lancelot?


B: In a way I liked this more realistic version because it was a it should be, no magic, no Merlin and no shining knights at a round table. Here there was dirt, no one was honorable and everyone only thought about themselves. Ok that I did not like, her attempt at making the legend more realistic only made it not so. I am sure there were nice people even back then.


I missed Lancelot in a way, mostly cos when Arthur slept around with every woman who walked by I felt Gwen should get some too ;)


A: I know what you mean.  I liked how gritty the story was- it seemed very true to what life would have been like in post-Roman Britain.  But Merlin has always been my favorite character in Arthurian legend, so it was sad not to see him.  However, it was interesting to see that in this book, Arthur had a wife before Gwenhwyvar.  From what I've heard, it's likely that he had three wives (possibly all named Gwenhwyvar- I guess it was a common name).  This is the first time I've seen an author go that route, which was interesting to see.  Also, there are still two books in the series to go, so maybe more of the traditional aspects of the story will come into play later on.  This was kind of a prequel, it seemed, as Arthur was still working under another king for much of the story.

B: Oh my fav subject. I loathed Arthur! He was a manwhore. He slept with every woman, he looked at every woman. He did not care if they were married or not, he was highborn and they should serve him. That he left a trail of bastards he could not have cared less about. He said he always loved Gwenwhyfar but nope that did not keep him at her side.


He was also whiny in a way, poor little Arthur did not get her as his wife so he married someone else who he abused, raped and hated. But well that did not keep him from her side and she still liked him. All women loved Arthur and I can't see it. They said he was not that handsome still everyone wanted him, and I would sure stay away from a wifebeating drunk. No I cannot understand it, I guess women are stupid according to her.


As for his servants, well he slept with the girls, and it is not like they ever could say no, or that he ever asked them what they wanted. Yes I could go on and on about Arthur because he has not a single good trait in him. Vortigern was supposed to be the bad guy but I feel Arthur was the bad guy in this story. He made his life and then he was angry about it. That he created a legend is beyond me.

His friends, well I guess he was nice to them, as long as they did not have a pretty wife.


A: I agree that Arthur was a jerk in many parts of the story.  I think Hollick explained herself a bit in her Author's Note, saying that she did reading about the people Arthur's character might be based on and they are generally sketchy people.  To one extent, I can see why to be a leader, he had to really make himself seem larger than life and more powerful than everyone else- thus he drank more than others, had more women than others, fought harder than the others, etc.

However, I also think it's sad that realism in this era means rape, pillage and drunkenness.  I suppose that is a product of war to this day, and in that era, war was ever-present, everywhere.  But it was really disturbing.  And then the girl would get a coin for her troubles, but she'd oftentimes have to either abort a baby or raise it.  I guess it will all hit Arthur when Mordred comes along (if he comes along in this version, that is), but it is sad and just seems very careless to me.

As for me- I did think Arthur was pretty charismatic with people he liked.  I can see why people followed him and liked him, but I can also see why some people hated him.  His whole relationship with his first wife, Winifred- well, I don't want to give anything away to anyone who has not read the story, but it is just disturbing.  I read in another story about hate becoming love, or at least really bringing out passion in people.  And that is certainly true of Winifred & Arthur's relationship.

What did you think of the women in the story?  Do you think they acted the way they did to get noticed?  To do what they thought best?  To try to make an impact?

B: Oh the women, I should not use the word but they were bitchy. What kinds of women act like that? I did not care of her portrait of women. They were scheming, mean and some were killers. They used what they had to get their way, and they liked it. They were not nice, and could sure get seduced fast. The exception was Gwen, she was like the shining beacon but that did not make me like her either. She was a tomboy, she could use a dagger and she could ride a horse. Oh what an accomplishment, I am sure other women then her could ride in those days. There were no between, there were Gwen and there were the bitchy women. And why she kept liking him I do not know.


It was like they weren't that smart either. They could only think so far, silly women, playthings for men. I know that in those days it would be hard for women, but they still lived in a land were women had been powerful. And still at least one could have been nice.


A: My completely made-up theory is that authors who write about really strong, dominating men sometimes fall in love with them and the other characters fall flat in comparison.  I get the impression that Hollick really loves the character of Arthur- his complexities, his demons, warts and all.  I didn't get the impression that she enjoyed writing about the women nearly so much.  They certainly seemed one-dimensional when compared with Arthur.  Morgause and Winifred didn't have a positive trait between them, and spent most of the book "raging" or being evil.  I could almost hear their cackles.  I completely understand that this how Morgause is usually portrayed.  But it would have been nice to see what motivated her to act the way that she did.  To know what made her so hard and difficult to deal with.  As for Winifred... I could have done without her in the story at all.

As for Gwenhwyvar, I spent most of the book disliking her, too, and then towards the end became more reconciled to her.  I have never liked the character of Gwenhwyvar, in any Arthurian tale, so I went into the story biased against her.  But I agree she was the only woman who seemed able to do anything useful, which was odd in a story when the men were often away fighting wars.  Someone would have to know how to do the things Gwen did or nothing would get done at all.  I thought she became more real towards the end of the book, and I liked that Hollick made her relationship with Arthur more true, rather than just based on the romance of the moment.  It will be interesting to see how they evolve together.

More can be found at Aarti's blog :D Go on over later to see what we feel at the end.