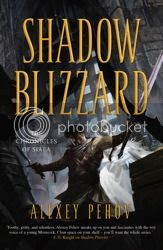 Shadow Harold, Siala's master thief, is on a quest for the Rainbow Horn that will restore peace to his world. After the loss of friends and comrades, after betrayal and battle, Harold finally reaches the dreaded Hrad Spein. But before he can complete his quest by stealing the magic Horn, he will have to brave the most fearsome obstacles yet--obstacles that have destroyed everyone before him...and Harold must do so alone.

My thoughts:
Where to begin? The journey started in previous books has come to an end, well ok not really. It's just getting started if you think about it.

Harold (I do love thieves) and his gang are approaching Hrad Spein. Kli-Kli, it's always good with a comic relief, the dark elves, and human warriors are with him. And they have lost a lot of friends already. Pehov does have a way of killing off people. But then not all should make it, people must fall during the way cos it's a dangerous road so I liked that he is not afraid to do just that.

Much of the book takes places in the darkness that is Hrad Spein. Fights, horrors, revelations, all to save a kingdom and the world. So much more than others think are actually going on. The Dancers, the creators of world, the Houses, and the person that created Siala. Not to mention that Harold is supposed to be a dancer too, which means that he could create a world. He is such an unlikely hero and that makes him better.

The second part took place outside of Hrad. The quest is not yet done and more battles are to come. It's fighting and quest fantasy.

I did feel that there is so many more stories still to tell and I would like to stay in this world, but sadly this was the end of this trilogy. But Pehov has created a very interesting world, and a world I would he happy to visit again. And it feels like home too, it's a world I know, yet it's so very new.

Some of the fight scenes at the end did feel a bit jumpy, but eh, that's life and war. And something did happen that made me sad, but again that's life and sadness is needed in books too.

Conclusion:
I do think there needs to be another Harold trilogy ;)