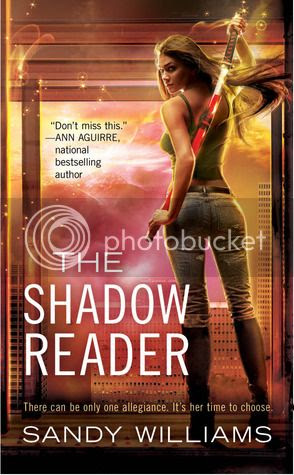 There can only be one allegiance. It’s her time to choose.

Some humans can see the fae. McKenzie Lewis can track them, reading the shadows they leave behind. But some shadows lead to danger. Others lead to lies.

A Houston college student trying to finish her degree, McKenzie has been working for the fae king for years, tracking vicious rebels who would claim the Realm. Her job isn’t her only secret. For just as long, she’s been in love with Kyol, the king’s sword-master—and relationships between humans and fae are forbidden.

But any hope for a normal life is shattered when she’s captured by Aren, the fierce and uncompromising rebel leader. He teaches her the forbidden fae language and tells her dark truths about the Court, all to persuade her to turn against the king. Time is running out, and as the fight starts to claim human lives, McKenzie has no choice but to decide once and for all whom to trust and where she ultimately stands in the face of a cataclysmic civil war.


That is the world in general was good, and I like the idea of it all, but I fear I had higher hopes and I got disappointed.

Why was this? I have spent some time thinking (and I never think when i review) and here reason is simple, McKenzie. Look at her all kick-ass with a katana and, oh wait, she has no katana, she was certainly not kick-ass. She was a sheep. She did what people told her and she never questioned it. She let a man string her along since she was 16. She never fought in this book, she was meak. She was not even a damsell in distress, she was more a shadow of something. A follower.

Ok so would I have questioned things? Perhaps not, but 10 years is a long time to believe what others tell you, Fae who will not even let you learn their language. A man who tells you it's forbidden for Fae to be with humans. Did she believe all those "bad" Fae she hunted down was put in prison? Come on, that is just stupid, of course they would be killed and tortured. In this book she learns that other Fae tells their children if they are not good then she will come and get them. And she never knew this? So yes her sheep tendencies irritated me.

The men then, of course the rebel leader fall for her like at once. Does she? Did not feel it. And why did he fall when she was such a sheap? And then we have the guy who has strung her along since she was a kid, first, bad Fae! Still him I got, he was conflicted and all. But why she did not give up that I do not get. She got nothing from the relationship..not even sex.

Now I have spent paragraphs dissing her, but the book was still good. I enjoyed how the rebels fought the King. Learning more about the Fae world (would have wanted more). It was interesting and it was good.

Still..at times the storytelling felt a bit disconnected. Like I was hearing it from afar. Something still made this book good at times but when thinking back i just feel annoyed and that is not a good sign. When annoyance takes over. I did have it down as a 3 first, cos of the good parts, but now I just feel all meh.

Conclusion:
Make up your own mind, sadly I can't recommend it even if I liked some things.

Cover:
Cool, but so not her.