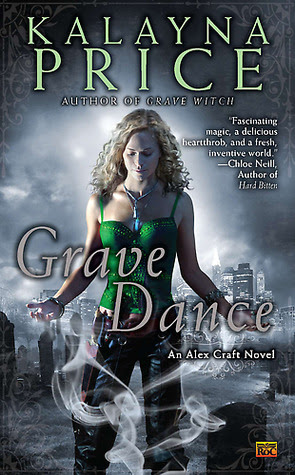 After a month spent recovering from a vicious fight with a sorcerer, grave witch Alex Craft is ready to get back to solving murders by raising the dead. With her love life in turmoil thanks to the disappearance of Fae Investigation Bureau agent Falin Andrews and a shocking “L” word confession from Death himself, Alex is eager for the distractions of work. But her new case turns out to be a deadly challenge.

The police hire Alex to consult on a particularly strange investigation in the nature preserve south of Nekros City. The strange part: There are no corpses, only fragments of them. A serial killer is potentially on the loose, and Alex has no way to raise a shade without a body, so she’ll have to rely on the magic of others to find leads. But as she begins investigating, a creature born of the darkest magic comes after her. Someone very powerful wants to make sure the only thing she finds is a dead end—her own.

My thoughts:
Was it as good as book 1? Truth be told I do not remember, I just felt I needed to read this one. And even if this one was not awesome, I still want book 3.

Alex is a cool witch, she also has hidden talents that comes to play here. I like secret pasts.

Falin, oh I do not know, I do not like him all the time. He is not the man I want for her.

Death, I mean I read this for him, I love him *swooooooons*.

Conclusion:
Now where was I? I do not have a lot to say about this book, I swooned over Death, I liked Fairy Land, I do want more. But...it felt messy at times.