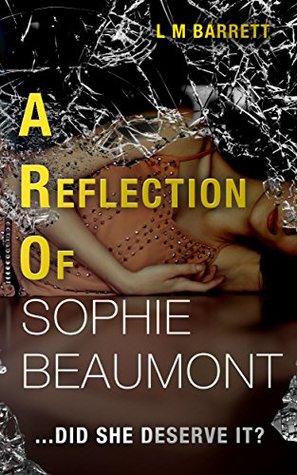 Author: LM Barrett
Title: A Reflection of Sophie Beaumont
Genre: Mystery
Pages: ebook
Expected Publishing: November 2017
Where I Got It: My shelf (Given to me by the author/publisher for my honest and unbiased opinion)

When a devastated Richard Beaumont returns home one evening to find out that his beautiful, happy wife Sophie has committed suicide it sends him on a journey to unravel the mystery of why someone with a seemingly perfect life would do such a thing.

He discovers deep and dark secrets from her past and present that he would have rather left uncovered. Does what he find out eventually lead him to agree with her suicide note, that the love of his life deserved it?


Follow the twists and turns in Sophie's life as we learn the real reason for her demise.

Been a while since a book made me produce real tears. This was just so tragic every way you looked at it.

The story follows Richard and Sophie. Richard just came home from a business trip to find his wife had killed herself. He is shocked because she seemed so happy all the time. He decides to find out the truth and why she decided to end it all and leave a tragic note that says that she deserved it.


We get to discover more and more about Sophie's dark past. We even get to learn more than what Richard learns which made me sad. She did some horrible things and went through horrible things. I don't think she deserved to die though. At least...like that. So terrible.


This book really makes you think as well as feel. One, you really don't know someone's past. Two, you should be honest to the one you love and to yourself. A lot of this could've been avoided if Sophie had been a hair more honest to Richard. He could've helped her. Avoided this tragic end.


I felt so bad for everyone involved...even Andre a hair. Every way you look at this story is a tragedy. The kids...the poor kids.


My only issue was the ending. Why? I wanted Richard to have it so bad. Maybe there will be a sequel out there? Or a short story with Richard getting it? I can't what the IT is...but it drove me insane.


In the end, I really enjoyed this. The characters were intriguing and the story was good. Well....sad...but done well. I do not think Sophie deserved her death even though she did horrible things and experienced horrible things. She really needed help. Poor everyone. I'll stamp this with 4 stars.