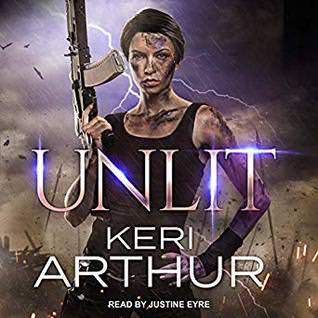 My Thoughts
I have seen some call this fantasy romance, but I do not really want to call it that. She has grenades and assault riffles. Yes to sci.fi romance. I could even imagine this being a future from earth where settlers lost a lot of their history and tech in wars. Who knows! But it sure is interesting.

Neve grew up a soldier. It's a class society. We have those with magic and those without, unlit. We have those that are stained (like Neve), bearing patches of skin belonging to an enemy of a long ago war. Though she can speak with the wind, but that is something she does not tell. She would only end up being a breeder (yes this world can be pretty horrid that way.) Like all societies it has its good parts and its bad parts. Like how they are very sexually. But yes then there is the whole breeder thing. And the whole stained was killed at birth in the old days.

In this world there are bad guys roaming the wastelands, another race that eats the flesh of humans and are stronger and faster.

I am loosing my train of thought. You know what, I really enjoyed this book. There is a mystery as a woman lost for 12 years is found in the desert. There is a conspiracy going on. There is a hunky guy she meets who needs her help. There is lots of fighting since well, baddies outside the walls! And there are such creepy bad guys with their plot. That is beyond cruel.

I am intrigued by this world, I do want more. Now it's like they do not really know more because of those long ago wars.

Book 2 is to be about someone else so yes there is an ending and I was happy with it. It worked out very well.

Narrator
It is Justine Eyre! I do like her so of course I liked everything about how she narrated this book! Perfection! She made it great

Though classified as having no magic, Neve March can hear the whispers of the wind and sometimes even control her. But it’s a secret she must hold close if she wishes to continue as Nightwatch—the soldiers who guard Winterborne against those who roam the wastelands and feast on human flesh.

When Neve is sent to investigate a faint SOS signal, she not only unearths a woman close to death, but a plot involving an ancient enemy long thought dead.

In an effort to expose those behind the plot, Neve goes undercover amongst Winterborne’s elite—a dangerous step that could expose her secret and rip away all that she holds dear.

The trail of treachery leads her from Winterborne’s golden halls to the heart of the enemy’s hive, and it will shake her belief of not only who she is, but what she is