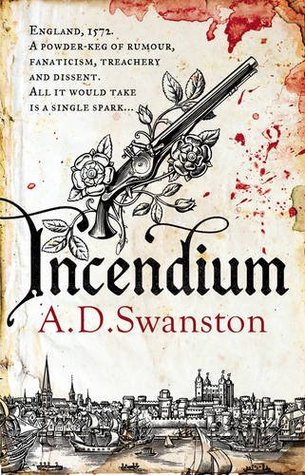 Summer, 1572 and England is vulnerable. Fear of plague and insurrection taint the air, and heresy, fanaticism and religious unrest seethe beneath the surface of society. Rumour and mistrust lead to imprisonment, torture and sometimes murder. To the young lawyer Christopher Radcliff and his patron and employer, Robert Dudley, Earl of Leicester, the prospects for peace are grave - and as Leicester's chief intelligencer, he is charged with investigating both the rumours of rebellion at home and invasion from abroad.

But Radcliff's own life is far from orderly. His relationship with the widow Katherine Allingham is somewhat turbulent and the cut-throat world of court politics leaves no room for indiscretions.
That the queen's own cousin, the Duke of Norfolk, is found guilty of treason, it is a sign of just how deep the dissent goes. Jesuit priests have been sent to England in order to foment revolt but the threat of a Catholic uprising comes not just from within. Across the channel, France is caught up in a frenzy of brutal religious persecution and England's other enemy of old, Spain, is making preparations to invade. England is a powder-keg, just waiting for a spark to ignite it - and then Christopher Radcliff hears word of a plot that could provide that spark. The word is 'incendium' - but what does it mean and who lies behind it? Suddenly Christopher Radcliff is caught up in a race against time...

My thoughts:
I have said it before, but historical mysteries really fit me. They have to work so hard to find anything, in a good way.

In this one Radcliffe, a lawyer works for the Earl of Leicester. And there is a plot afoot. Does someone want to kill the queen? Who can be trusted? Tensions between Catholics and the rest are rising. France is making moves, Spain is making moves. And Radcliffe is meant to try to figure out what is going on, and then there is the word, Incendium.

Who was behind it. Oh I could not guess hidden players. But I enjoyed reading about it and him finding out more. His hidden agents, the help he got from the woman he loved. It does take more than just one man looking through London so solve this mystery,