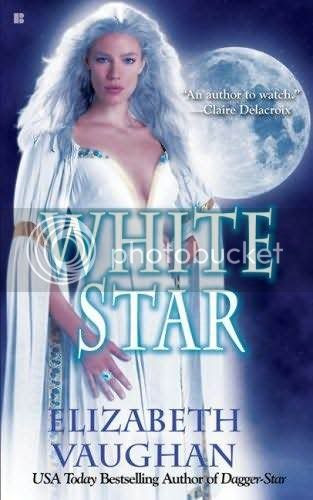 White Star is the sequel to Dagger-star that came out last year. It's fantasy romance set in a world she described in an earlier trilogy.

The Lady High Priestess Evelyn is virtuous and loved. She is one of the leaders of the rebellion against the usurper who has claimed the throne. She is a healer who helps the injured and the sick.

Orrin Blackheart, the scourge of the Palins is despised and hated. He is known as an evil man who stands at his Duchess side against those who rebel. He has killed many, and he stood by his Duchess and Sorceress as she created an army of the dead. An army that plagues the countryside and claims more for their ranks.

Orrin takes Evelyn prisoner during the war and takes her to the castle at Black Hills. Here she knows what she will face, death and torture, but instead they both find something in each other that they didn't expect, passion, but can it withstand?


I liked this book, it was cute and I do love my fantasy so what better than romance and fantasy. And it had zombies, I am not a fan of zombies, they can give me nightmares. What more horrific than something that just keep coming at you. And yes these zombies keep coming. But that is jsut what this book needs.

This is then book 2, I didn't know that, and you can read the book without reading the first one. Of course where did elves come from? I did wonder about red gloves and queen Gloriana, and the obession with a lord called Josiah. Still she explained vital things in the beginning and what I wondered about I got answers to in the end, well except where those 2 elves came from.

Early in Evelyns capture Orrin learns that his Duchess is dead, and he lets Evelyn go, and negotiates a truce for his men. Then he must stand trial for the crimes he has commited. I will not say more, but their love doesn't have an easy road to take.

Evelyn seems to be a good hearted heroine, but she does have past too with darkness. There is nothing that makes me dislike her. Orrin, oh he has been wicked, truly evil, I have to like him. Because even though he has done horrific things in the past and he wants redemption, he wants to change, he wants his men to have their freedom. He is a good man who sure took the wrong way, but love makes fools of all of us. He wants her, but he don't wants to spoil her purity with his evil past and ways.


Can there be a HEA, and even if there is one, he will always be hated. They are such opposites and that shows too in how they look. Evelyn always in white with white hair. A beacon of light to his own darkness. I do want their happy ending, they both deserve to be that. And I have a soft spot for the bad guys.

I did wonder about those elves in the beginning and I do want to know more about this world, or at least see a map. That would help to build it better. But the story is more focused on romance, and wiping out those zombies. The war behind them, and politics is not focused on. If the lands are rebuilt I do not know. But in the end I don't care, I get romance and action and can be happy with that.

A third book is on its way and there we will see two characters from both previous books.