An Angel for Emily - Jude Deveraux 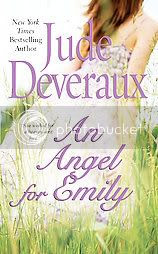 An Angel for Emily by Jude Deveraux

Emily Jane Todd is a small town librarian who in her spare time delivers books to libraries in need around the Appalachians. She loves her work, and she loves her town. On one of those trips she by mistake runs over a man with her car. He seems to be ok and he claims that he is an angel and that his name is Michael. He is very sexy and even though she has a fiance she offers him a room over the night. Just to see that the poor man isn't totally insane.

But Micheal is something different, she feels calm and beautiful around him. He makes her laugh and he knows things about her that he shouldn't know. He claims that he is there to save her from a great evil, but she has no idea what that could be. He says that her soul is a rare beauty, and she can't help fall for the strange man. She is willing to risk heaven in his arms.


I spent most of the book wondering of the poor guy has had his brain fried out, or if he really was an angel. He sure had a lot of guys after him, FBI, one crazy woman and the mob. This was then a real hard book to place, it's contemporary romance but with this hint of paramormal in it. She has written it in a way that just makes you wonder.

Emily was a nice enough heroine, plain and thought herself as somewhat boring. Maybe cos that was what her ass of a fiancé told her. But Michael saw to just more than her outside, which was beautiful too, but also her inside and loved her for her pure soul.

Still this book is no where near as good as her historicals. Those make me ache while this one was cute enough for the ride. Nothing to cheer over, but could be read cos I do like her style and I sure wanted to know if he actually was an angel. And not that it had any heavy religious inputs but it did have the vibes that just made it too sweet and wholesome. It could have been more, better, cos nothing wrong with the story.

Never did think Michael was sexy either, never got a feel for him, I just wondered if he was insane. But I wanted them together, I wanted a HEA, and could it happen?

But if you want a cute book, with some danger and romance in it then go for it. If you never have read Deveraux then don't start with this one. Start with the lovely historicals and then come back to this one because you will enjoy it more then. *hinthint* Velvet Song ;)

Have a nice weekend :) I sure will, we are having some lovely weather here.