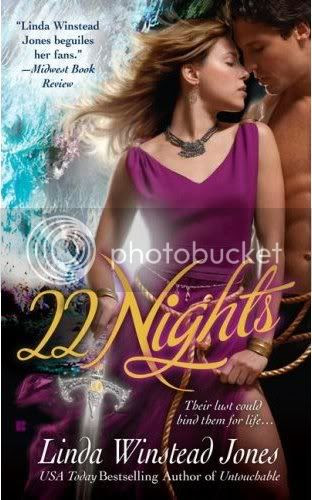 
The emperor has his eyes on the lovely Belavalari as his future empress. Little does he know that Bela has spent the last five years intent on one purpose - revenge.

And when the dashing general Merin is sent to collect Bela, he's horrified to learn that she's already married - to him.

First I just want to take up this whole paranormal romance genre, well ok, this is fantasy, with romance. I would just rather have it called fantasy romance then. Because to call it paranormal gives it the wrong feeling, in most fantasy I haev read there is magic, sometimes hidden and sometimes not. Nothing parano0rmal about that. When it takes place in this world then yes do call it this. But here I always gets confused, is it set in our world or not. Here it is not. Therefore my little fantasy speech.

Second, this blurb is misleading and it made me not care for the second storyline. I wished she had not made it like that. There is Bela and Merin. And suddenly there is a woman called Leyla who is having sex with this guy Savvyn. Why I thought, and read past that to get back to Bela. But Leyla kept coming back and then I understood that this book is actually 2 books in one in a way. They are about the same thing though so that is what they have in common.

I wished that could have been mentioned so that I would have cared more for Leyla. As for the cover that is Bela and Merin.

But ok, the story is that the emperor wants a bride, and he sends out sentinels to get him 6 brides so he can choose. Bela, is one of them. But when general Merin arrives he gets a surprise. He sure remember the woman who jumped him and then left. But he did not know they were married. A divorce is in other so he can bring the bride to his emperor.

The second story is about Leyla, a widow who has been called forth as a bride too. A bit older, and with a younger lover who she now must leave. She sets out but it's a dangerous journey to the capital.

Bela is a bit spoiled now and again. She wants to be a warrior and she dresses and act likes a man. The she suddenly goes soft, and I don't know about that whole thing. But I still liked her. Merin too. As for the whole lovestory, well yes I knew they would be together but I don't know if I cared.

Leyla and Savvyn was different. I did not care for them at first, though I wish I had. But their lovestory was more intense, and I longed for these too. They had more obstacles to get trough and that made them real.

There was also much focus on something that I guess will happen in another series. I then hope she writes that one cos else it will be strange.

But it was a good little story. I just wish tI would have known about the two storyline plot. I did get caught by surprise about the whole sex thing with two strangers that did not seem to have anything to do with Bela and Merin. Oh and yes it was a lot of sex too. But it fitted the mood and what happened trough the book.

It is a book that I am sure lovers of romance in a little fantasy world can like. Cos there is plenty of that. Some hardships, and danger too. This is book 2 in the trilogy Emperor brides, but you can read any of them in any order really. Well perhaps not book 3, but we all know who people will fall for in the beginning with these books anyway.

Cover thoughts: Love it, those colors, yes perfect. But it looks a bit strange to the side.

Why I read it: My book

I don't know if to give it 2,5 or 3. That whole storyline caught me so unaware really and therefore my hesitation. But now you are warned.