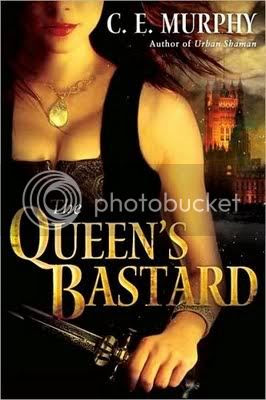 The Queen's Bastard by CE Murphy


In a world where religion has ripped apart the old order, Belinda Primrose is the queen's secret weapon. The unacknowledged daughter of Lorraine, the first queen to sit on the Aulunian throne, Belinda has been trained as a spy since the age of twelve by her father, Lorraine's lover and spymaster.

Cunning and alluring, fluent in languages and able to take on any persona, Belinda can infiltrate the glittering courts of Echon where her mother's enemies conspire. She can seduce at will and kill if she must. But Belinda's spying takes a new twist when her witchlight appears.

Now Belinda's powers are unlike anything Lorraine could have imagined. They can turn an obedient daughter into a rival who understands that anything can be hers, including the wickedly sensual Javier, whose throne Lorraine both covets and fears. But Javier is also witchbreed, a man whose ability rivals Belinda's own . . . and can be just as dangerous.

Amid court intrigue and magic, loyalty and love can lead to more daring passions, as Belinda discovers that power is the ultimate aphrodisiac.

So I am not entirely sure if this is a fantasy world, or an alternate universe, or alternate timeline. It has the essence of 16th century Europe and there is where she lost me the first time. You see there is with one particular person too much that is the same. Queen Lorraine, who has the same appearance, family history and more as a certain Virgin Queen. It is so obvious that it is her that it is not funny anymore. The rest she hides better and I liked that. But I wish she at least could have changed the name of her dad or the color of her hair. She could have done with this world if the had created more of her own. She could still have had a Virgin Queen, but you know, another name, another and etc.

Then there is the thing that made me appalled by this book. I was horrified and I have never hated a heroine more. First of, Belinda Primrose, the bastard daughter of the queen is trained to be an assassin. She is weird as a little kid and does things they would not do. Then her father, a father I could not understand, sends her out to kill at 12, and she does it. Ok, I can take a little sociopath. Then we move forward and she sleeps her way to her pray. She is no better than a prostitute, and then there is the first scene that has me wondering. Things move on and she does seem to think with her libido, she is supposed to be a great assassin but still she could almost mess things up with suddenly having to have sex. That is not the mark of a great assassin.

By now I am not that fond of her, she clearly has issues, but then there is the scene that made me think this was the most horrible heroine I have ever read. There is a rape scene, she does it, and then she helps to do it to the victim. After that I am mostly sick to my stomach of Belinda, and I am speeding trough the book to just get it over with. Thinking only of the fact that I sadly have book 2 also. And I don't want to read more about her.

There is no other characters to like, they all have issues too, and even the nice one does something bad. Sure it is all a play of politics and more but people does have some decency in them.

This was clearly not the book for me. Some scenes I can just not stomach, and I can not read a book about someone I despise.

Cover thoughts: Yes I do like this cover, feels strange to say that not after this review.

Why I read it: My own book

1, because I could not think with a clear mind