Interview and Contest: Ciji Ware and A Race to Splendor

Today I welcome Ciji Ware to my blog. She is the author of A Race to Splendor, which I reviewed yesterday. At the bottom of this blog is a contest where you can win this book.
Welcome!
Tell me something about yourself so we can get a better understanding about the woman behind the author.


Probably the single, most influential force in my life is that I come from a long line of writers.  Some families produce doctors; others hand down skills in the building trades from generation to generation.  Mine happen to have been wordsmiths.

My late father, Harlan Ware, wrote the radio classic, “One Man’s Family,” as well as some 45 short stories for Colliers and the Saturday Evening Post magazines. He is also the author of the novel Come, Fill the Cup, which was made into a classic film noir starring James Cagney and Gig Young. My late uncle Darrell Ware was an Academy Award nominee for screenwriting, and my other uncle, Leon Ware, was an award-winning children’s book author. I even have a couple of ancestors who were writers:  William Ware wrote the historical novel Zenobia published in 1898, and Henry Ware, acting President of Harvard in the early 19th century, published scores of arcane works on the subject of religion.
As you can probably imagine, with an intimidating legacy like that, I didn’t have the courage to attempt to write a book until I hit forty—so for any late bloomers out there, you are never to old to try to get into the novel writing game.

However, I had an earlier career as a broadcaster and news producer:  23 years, in fact, working for all three network affiliates and the PBS station in Los Angeles.  Seventeen of those years I was an interviewer and reporter on KABC-TV, and a commentator for KABC Radio’s morning “drive-time” show.
On the personal side: I hold a degree in History Renaissance history  (about which era I have never written, oddly enough) and have been married to the same man for thirty-five years, this December.  My son, now grown, is carrying on the family tradition, only in the digital world:  he’s a professional still photographer, as well as a film and video editor and “shooter.”  He’s traveled on tour with the Beastie Boys and on location for feature films to help the director and cinematographer decide on how best to set up shoots.  I found out afterwards that on the HBO film Bright, Shining Lie, my son was dangling from a harness in a helicopter to “scout” shots in a jungle!  Frankly, writing is a lot safer. 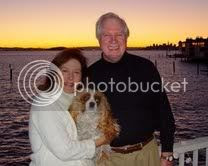 A final bit of background: I am an avid fancier of the King Charles Cavalier spaniel.  Ensign Aubrey and I are part of the thrice-weekly dog-and-people walking group where I live in the San Francisco Bay.
Your newest book is called A Race to Splendor. Tell us what it’s about.

The story is set in the tumultuous aftermath of San Francisco’s devastating 1906 earthquake and fire.  The heroine is a composite character based on the lives of several women (and men) apprenticed to famed Julia Morgan, California’s first licensed woman architect.  It tells the tale of a little-known today, but fiercely fought competition between Several San Francisco hotels to re-open their doors by the first anniversary of the disaster–-proving to the country and the world that the city would rise from the ashes.  Amelia Hunter Bradshaw, fresh from earning her certificate in architecture at the prestigious L’Ecole des Beaux Arts in Paris, finds herself, through a series of flukes and mishaps, in the employ of the one man determined to best Miss Morgan, Amelia’s mentoress and friend.  Intrigue, political corruption, and an undeniable attraction to the mysterious James Diaz Thayer threaten not only to jeopardize her personal life, but also prove fatal to all she holds dear.
Amidst rubble, dislocation, and deceit, Julia Morgan and the heroine, Amelia Bradshaw—young architects in a city and field ruled by men—find themselves racing the clock and each other during the rebuilding of their competing hotels in the City by the Bay.

How did you come up with the idea of setting it after the San Francisco 1906 earthquake and fire?

I started on this book long before the natural disasters of Katrina, the tsunamis in Indonesia and Japan, the BP oil spill, or the earthquake in Haiti—but I had lived through several bad quakes in Los Angeles, and had covered the aftermath of the Northridge temblor as a news reporter in the mid-1990s.

When my husband and I moved to the Bay Area in 1998, we rented a flat on Nob Hill in a building, designed around 1908 by Julia Morgan, that was only a couple of blocks from the fabled Fairmont Hotel.  Later, come to learn, that the then 34-year-old Morgan got the commission to restore the badly-scarred hotel in the wake of that cataclysm that left some 490 city blocks obliterated and an estimated 250,000 of 400,000 San Franciscans homeless for up to two-and-a-half years!  The Fairmont, the St. Francis Hotel in Union Square, and the famed Palace Hotel, a half block south of Market Street, were then in a race to open their doors by the first anniversary of the quake: April 18, 1907.  What historical novelist could resist such a call to her computer?

The aspect of architecture that fascinates me the most is preserving old, beautiful buildings from the developer’s bulldozer. I have written this as a subtext for another novel of mine:  Midnight on Julia Street –set in the historic French Quarter in New Orleans.  I currently serve as vice-president of a historic preservation society where I live.  The Fairmont is a gorgeous example of beaux arts architecture and was only a few days from its Grand Opening when the quake struck.  Built on the bedrock of Nob Hill, it survived the 8.25 temblor (some scientists have downgraded it to 7.7, but whaterver…it was fierce!).  However, the firestorm that engulfed so much of San Francisco reached temperatures of several thousand degrees and the Fairmont was left a burnt-out hulk with some floors falling seven feet.  I admired the owners for being willing to hire one of the finest architects available, and to pour money into their building for a second time!
I see that you have written a lot of other books.  Could you tell me about those?

To earn a living as a writer, my father warned me I would have to be a “Jill-of-all-Trades” and be able to work in all sorts of media.   I guess that’s what I’ve learned to do. I’ve written two nonfiction works:  Rightsizing Your Life—Simplifying Your Surroundings While Keeping What Matters Most, and, years ago, Sharing Parenthood After Divorce-- and developed an event speaking career on these subjects, as well as having written for magazines, TV, radio, and now, online. 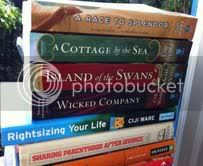 However, my heart remains with historical fiction.  I’ve now authored three “full-on” historical novels(A Race to Splendor, Wicked Company, and Island of the Swans), and three paranormal/historical novels (A Cottage by the Sea, the aforementioned Midnight on Julia Street, and A Light on the Veranda).  The latter are tales that start in the present and then weave a connected story of the contemporary characters and their ancestors—focusing on how events in the past can echo down through the centuries, affecting the present.  All three were cast in this dual-story structure à la the film The French Lieutenant’s Woman, which rather gives the reader two novels for the price of one!
Who is your favorite hero or heroine from your books?  What makes them so special?

That’s akin to asking me which child do I like best—which, of course, is tricky to answer. My first loyalty is to the first heroine I ever wrote, Jane Maxwell, the 4th Duchess of Gordon, whose portrait hangs in the Scottish National Portrait Gallery in Edinburgh and was used as part of the cover in Sourcebook’s new edition of Island of the Swans. She plunged into eighteenth century election politics at a time when women not only couldn’t cast a vote—they were supposed to stay home and sip tea.

However, I’m quite partial to my latest heroine in A Race to Splendor, Amelia Hunter Bradshaw, newly-minted architect who returns from her studies in Paris and then is tested in every way imaginable, and shows courage and integrity and ingenuity at every turn.  The women I write about were all pioneers in their fields, and for a female at the turn of the 19th century/early 20th to have the audacity to design and build buildings (especially in an earthquake zone), Amelia sprang forth as someone I would have loved to have known.  She’s a composite character, based on the men and women who actually worked for Julia Morgan, but somehow, she’s become an absolutely ‘real’ personality in my mind. I love her spunk, moxie, and her single-minded determination to forge an equal partnership with the hero—in 1906, mind you!
Are you working on something new and exciting now?

I’m noodling over a couple of ideas, and may have come up with a stand-alone sequel to A Race to Splendor.  Too early to tell, though….

An advice for aspiring writers?

The thing that’s always inspired me is reading what I love to write.  Now, to be sure, I steer clear of reading a work of fiction that’s close to a topic I’m currently working on  (There was a novel about the 1906 SF quake, for instance, that came out in 2006 and another on about the firestorm in 2010, and I didn’t want to be influenced by either)—but generally, I read what I love.  Also, if my career says anything, it urges aspiring writers to “Never give up…just keep slogging along!”  A Race to Splendor took nearly a decade to research, write, rewrite, get a new agent, sell, and then “bring forth” over an 18 month period of working with the great people at my publishers, Sourcebooks Landmark.  Writing and getting published is not for the faint-of-heart…but it is so satisfying to “go the distance” and finally see the work make it to the marketplace.  If you aspire to write, the secret is:  Just keep writing!
Thank you!