David Ray killed eight students and then turned the gun on himself. He thought the shooting and suicide would fix his world. It didn't. The massacre threw Tanner Khan and the other survivors into chaos.

Twenty years later, Tanner and his fellow classmates reluctantly agree to hold a reunion to lay the past to rest. Although they suffer from Post Traumatic Stress Disorder, they come back to their hometown and reunite in the defunct school building. Old flames are rekindled, fears are ignited, and their lives are about to explode in a whirlwind of memories, haunted by the spirit of David Ray.

Once they're inside the school, they discover that a dark entity has joined them. It has come to collect a debt, long overdue, and someone has to pay. Will Tanner and his classmates overcome their fears, putting the pieces of their lives back together, or will they be consumed by their worst nightmare?
----------
"Reunion” (by Jeff Bennington) is fictional, and not based on anything that has happened in real life. It is the author’s third story, with more on the way.


Reunion” can be described as a paranormal thriller, but as the author writes in the foreword, it is also a mixture of “supernormal, horror, romance, suspense, and dark fiction”.

The story starts with a school shooting in Crescent Falls, a small fictional town in Idaho. A young man, David Ray, opens fire in his high school cafeteria, killing several students and seriously injuring others. The shooting occurs only days before the summer holidays.


The story then jumps 20 years into the future, and follows a number of survivors that were graduating in the year of the shooting. The survivors all have one thing in common; they suffer from post-traumatic stress disorder (PTSD). They all, however, deal with the PTSD in different ways, whether it is writing books, drinking or treating other people with PTSD.


Maria Vasquez, the Valedictorian in the graduating year who is now treating other people with PTSD, feels that the only way to put the shooting behind them, is to go back to Crescent Falls and have a reunion. And what would be better than to have the reunion 20 years after the tragedy? She contacts old school mates and some of them reluctantly agree to return to the town, which they have avoided for two decades, although some of the survivors remained in Crescent Falls the years after the shooting.


The survivors return to Crescent Falls well in time for the reunion, as there need to be a lot of preparations done. The high school has been closed ever since the shootings, and it is decided that the old school building shall be renovated before the big day. As the reunion day draws closer, the tension grows and the survivors continues to have flashbacks from the event 20 years earlier.


But there is something terrible going on in the school and the sheriff’s department is unwilling to tell the real truth to the survivors. Will they be able to have the reunion in the school after all? The sheriff Larry Richards is determined to find out what is really happening in the old high school and to solve the mystery before it is too late.

“Reunion” is hard to put down, once you have started to read it. You just have to find out what happens next. The different characters are all very well described in the book.


But “Reunion” also makes you think. Is David Ray such an evil monster, knowing what happened to him in the childhood? Could the society do something to prevent school shooters from comitting such horrible crimes? Do they deserve to die, the school shooters, or should they be put in jail for the rest of their lives? In the foreword, Jeff Bennington lists ten of the worst school shootings in the US history. When one hears and reads about school shooting one will of course feel sorry for the victims’ families and friends, but one should also remember the survivors.
I highly recommend “Reunion” to everyone. I think it is a very important book to read. It is very thrilling, with a little bit of romance and mystique. I give the book top marks, 5/5. 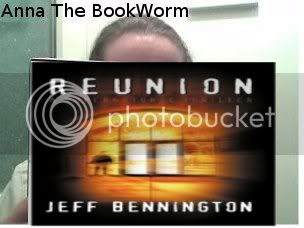