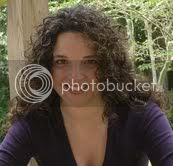 Today I have Donna Grant back on my blog with an interview to talk about her new book Echoes of Magic, and you can win her book Shadow of Magic (book 1 in the series:)
Welcome!
1. Tell me 3 interesting facts about yourself….
Hmm…interesting, huh?
I’m extremely allergic to perfumes and scented lotions/bodywash.  Gives me awful migraines.
I have a very real, very terrifying fear of spiders.  Any size. The bigger they are, the worse it is for me.
I’ve always been a reader, and always won the award for most books read throughout my school years.
2. Could you tell me about your new book, Echoes of Magic?
Oh, I’d love to.  ECHOES OF MAGIC is the second book in the Sisters of Magic trilogy and follows Grayson, who we met in the first book, SHADOW MAGIC.  Grayson is much more than he appears to be.  He’s been hiding most of his life from an unknown enemy.  He finally decides it’s time to find that enemy and learn what happened to his mother.
When he sets out, he never expects to find a witch, Adrianna, who not only saves him from the brink of death, but also who frees his heart from the chains of the past.
Adrianna has suffered through the curse placed on her people.  She not only lost her lover, but her child as well.  She believes there is nothing else for her in life.  Until she finds Grayson.  With him she discovers passion unlike she ever knew, and a love that could be the one thing to break the curse if she’s willing to give her heart.
3.  Why will readers fall madly in love with Grayson?
He’s tortured, and I think there’s something very compelling about a tortured hero.  There are secrets in Grayson’s past that he thinks he knows, but he doesn’t know the half of it. Just when he thinks he’s overcome all there is, Fate throws him another curveball.
I found myself rooting for him while I was writing his story. Lesser men would have crumbled under the weight of what is thrown at Grayson, but he weathers it all like only a true hero can.
4.  What is up next in this series?
The third and last book, DANGEROUS MAGIC, which feature Cade, my favorite of the three heroes.  If you love tortured, then you’ll love Cade.  He’s one of the darkest heroes I’ve ever written, but one that will always hold a special place in my heart.
5.  Could you tell me a bit about all the other books you have written?
I’ve written in many different romance genres from historical to contemporary, erotic and fantasy.  My favorites are historical and paranormal, but I usually go wherever the story takes me.
I’ve written several series.  My first, the Druids Glen, features my first foray into the realm of the Druids and Highlanders.  This is a five book series with a connected book, DRAGONFYRE, that takes the reader into a fantasy world.
Two other series that will be re-releasing over the next couple of years is the Shields, another historical paranormal featuring men from different times and realms battling mythological creatures.  A truly fun series for me.
And the Royal Chronicles, a mix of fantasy, historical, and time travel in four novellas about brothers who must fulfill their destiny to keep their world and their people alive.
I’ve also participated in a couple of anthologies – The Pleasure of His Bed, The Destiny Stone, and The Mammoth Book of Scottish Romance.
I’ve released my short – FOREVER MINE – from the Mammoth book as an ebook only, and its #1 on Amazon’s bestsellers list.
There are two more novellas I’ve re-released as ebooks – MESMERIZED (fantasy) and PRIMAL HEAT (contemporary paranormal).
But my pride and joy right now is my Dark Sword series and the upcoming spin off Dark Warriors series published with St. Martin’s press.  The DS series is my bestselling and award-winning historical paranormal series featuring Druids and Highlanders with primeval gods inside them.
The DS series starts off with DANGEROUS HIGHLANDER followed by FORBIDDEN HIGHLANDER, WICKED HIGHLANDER, UNTAMED HIGHLANDER, SHADOW HIGHLANDER, and the upcoming Jan 2012 release DARKEST HIGHLANDER.
In 2012 I have two sets of back to back releases with the Dark Warriors series.  MIDNIGHT’S MASTER (May 22) and MIDNIGHT’S LOVER (June 26) followed by MIDNIGHT’S SEDUCTION (Nov) and MIDNIGHT’S WARRIOR (Dec).  In 2013, two more sets of back to back DW books will release.
I’ve also been contracted with St. Martin’s to write three novellas that will release as ebooks between my 2012 DW releases.  These will start a new series that will be connected to the DS/DW world, but introduce some new heroes I’m very excited to write about.
6.  And last, any advice for aspiring writers?
Read.  Read.  Read.
And write, write, write.  Finish a story and start another.  The more you read and write, the better you’ll get.

GIVEAWAY
E-copy of Shadow Magic (book 1)
1. Ends Dec 8
2. Open to all
3. Just enter :)
With a past soaked in sin and darkness slowly closing in around him to claim his soul, Drogan only wants to live his life in solitude. Years in the king’s service and his numerous deeds directed by the crown have left Drogan with horrendous nightmares and immeasurable guilt...


Serena is a witch, cursed and forever alone. She accepts her future. Until she meets Drogan. With Drogan a passion deep and unyielding awakens inside her. She is willing to sacrifice herself for his love, but can he put his past to rest and embrace the future?

Hiding a secret so awful that his only hope for survival is to remain hidden, Grayson has lived most of his life pretending to be someone he isn't. After years serving as a commander to his lord and friend, Grayson can no longer hold back the past. He leaves in search of answers only to find evil awaits him. Until he discovers an achingly beautiful woman who stirs his deepest passions and all-consuming need.
Adrianna knows what her future holds for her as a witch - loneliness and heartache. She has accepted that. Until she discovers Grayson near death in the forest. Saving him is her only choice, and even as she falls deeper into the attraction surrounding them, can her magic be enough to stop Fate or the evil that awaits them.

Summer 1127
Western England, near the coast

Adrianna stretched her neck and flexed her hands that had gripped the reins for too long. When the band of gypsies she traveled with for the past three years stopped for a rest, she gladly hopped down from her seat of her wagon.


The stretch of road they had traveled was narrow and surrounded by woods. She loved wandering with the gypsies, but for the past week, she couldn’t shake the feeling something was wrong. Or was about to go wrong. No amount of magic had given her a clue, either.


As a bana-bhuidseach, a witch, she had spent her time trying to decipher just what was out of alignment. Each banan-bhuidseach had a special gift, and hers was seeing the future.


Adrianna was many things, but she wasn’t courageous enough to look into her own future. Not when her kind was cursed and slowly fading into legend.


As far as she knew, there was only one other bana-bhuidseach. Where once they covered all of Britain, soon no more would see the beautiful land.


The bana-bhuidseach had been around for so long that none remembered their true origins, though some text claimed they hailed from an ancient land of sand and sun.


Adrianna pushed a stray hair behind her ear and moved into the forest. She leaned against a tree and let the beauty and nature of the area soak into her. The need to be alone had driven her into the trees, but it would also help to calm her and the constant fear that something...evil...was about to descend.


The other bana-bhuidseach she had meet, Serena, had been followed by a man drenched in evil. Ever since then, Adrianna had sensed a growing malevolence throughout the land.


Her hands traveled down the elm tree, the bark scratching her palms. She sighed and began to turn back to her wagon when she caught a glimpse of something in the underbrush. Adrianna leaned down and peered through the ferns to find a bloodied hand.


With her heart hammering in her chest, she pushed aside the underbrush and found a man lying on his side. His long black hair was matted with leaves, blood, and mud and covered his face. By the look of the fine material of his tunic, he was a nobleman who had been ambushed most likely by roving bands of outlaws.


She sighed at the loss of life and began to rise to her feet when a moan stopped her.


“By the saints,” she murmured and gently pushed his hair from his face.


With her finger beneath his nose she felt his slow, shallow breathing. If she hurried, she might be able to save him if his injuries weren’t too extensive.


As tenderly she could, she turned the man onto his back. Blood had pooled beneath him and stained his light blue tunic. She saw no weapons, no jewelry.


Adrianna lifted her head when she heard the gypsy leader call out the pet name he had given her. “Over here.”


When the tall Romanian burst through the trees, his brother, Yoska, was right behind him. The men had the same black hair and dark eyes and tall, rangy build. They welcomed her into their family when she had found them, never asking questions of her past. For that she would be forever grateful.


Yoska said something in Romanian that made Milosh nod absently.


“Please help me get him back to my cart,” Adrianna said. “He’s wounded, but alive.”