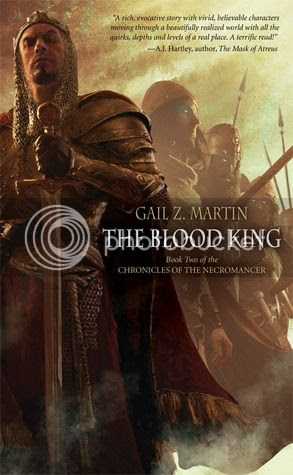 In The Blood King, sequel to The Summoner, Tris Drayke races against time to gain the skills he needs to challenge his half-brother Jared for the throne of Margolan and defeat the dark mage Arontala before the Obsidian King can be loosed from the abyss. Pursued by assassins and caught in a dangerous web of intrigue, Tris’ greatest danger is his own magic. The fate of his kingdom, his lady and his soul hang in the balance.

As Margolan plunges into darkness under the yoke of a tyrant, Tris leads an unlikely insurrection, knowing that if he fails, death will be the least of his worries. Betrayed by the living, Tris finds staunch allies among the dead and undead. As the truce unravels between mortals and vampires, angry ghosts demand their revenge, and the Sisterhood of mages lacks the power to intervene. The battle for the throne of Margolan and the freedom of the Winter Kingdoms rests on Tris Drayke’s magic—and his ability to control the powerful forces aligning against Jared and Arontala. Like a storm on the horizon, war is coming—but can Tris control what has been put into motion, or will his battle for the crown bring a greater darkness?

My thoughts:
I must say that I got confused at the end, not a bad confusion, just surprised because the story ended. Yes the quest was over, the good guys won. But this is a 4 book series? So I quickly did some research and it seems that book 3 is about one of the side characters. Go figure. Though I do not complain, a fantasy "series" that deals with the main issue in 2 books is something I like.

Tris needs to learn about his powers in this book, so that he can fight his evil brother Jared and his mage. And Jared, oh he is bad! He is a psychopath and that poor country under his rule! And of course the evil mage is insane too. So the baddies are really good at being bad, and that is the way is should be. To hate them with a passion. While the good guys are really good. Young Tris trying to cope with being a summoner, Kiera a warrior princess, the healer Carina, the bard Carroway, and Vahanian the mercenery. There are even vampires in this world. But they are good, sure they are undead but the stay close to their families afterwards. Just like the ghosts in this world. Some just linger on.

As the quest ends in this book there are lots of action to be had. A kingdom needs to be saved after all and a throne conquered. All while a few side characters fall in love.

Conclusion:
I enjoyed the story (even if I felt that confusion cos I thought it continued, lol ;) But I was happy to see it wrapped up and I will read the next book as it is about Vahanian who is a merc, smuggler, you name it. I am sure lots will happen there too.