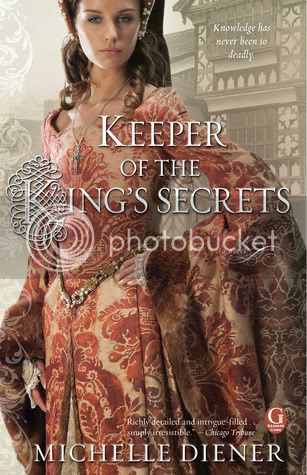 A priceless jewel. A royal court rife with intrigue. A secret deal, where the price of truth could come too high .  The personal artist to King Henry Tudor, Susanna Horenbout is sought by the queen and ladies of the court for her delicate, skilled portraits. But now someone from her past is pulling her into a duplicitous game where the consequence of failure is war. Soon, Susanna and her betrothed, the King’s most dangerous courtier, are unraveling a plot that would shatter Europe. And at the heart of it is a magnificent missing diamond. With John Parker at her side, Susanna searches for the diamond and those responsible for its theft, their every step dogged by a lethal assassin. Finding the truth means plunging into the heart of the court’s most bitter infighting, surviving the harrowing labyrinth of Fleet Prison—and then coming face-to-face with the most dangerous enemy of all.

My thoughts:
This book is a mix of things, first we have historical fiction, and it feels to be on the lighter side, then we got a bit of romance. But most of the book is suspense/mystery. And it certainly works well, set in Tudor England as it is and filled with court intrigues. The book is part 2 of a series and sure it could work on its own, but still it would be better to read book 1 and see how they met. But yes I guess it could be read on its own too, they way its made up should make that possible.

In this book Susanna and Parker is resting after their ordeal in book 1. They are in love and hope to marry. Susanna still paints and Parker is snooping around keeping the king safe as always. I like how Susanna does not back down, she stands her ground, she is still very much a woman of her time, but just as some dared to do more so does she. And Parked does his best to keep his lady from harm as she made a few enemies (and so did he). So him I like.

The Duke of Norfolk is still a baddie but more in the background because this book belongs to Woolsey. A good fitting bad guy who is plotting for his own agenda. Just like they all are. And behind things we see more plots, The French, Norfolk, those irritating Boleyns. They will sure become a problem in later books as in this one Henry is still married to Katherine. And Susanna has already had her run-ins with them.

The suspense is high as an assassin is running around, as people try to hide what they are doing and there is danger and action plenty. The plot is well done and keeps the suspense high, along with the mystery.

I do think I liked this one even more than book 1, I can't say what made it so, it just was. I liked how things never slowed down, how light the book still was and how I practically read it in one sitting.

Conclusion:
This one is for fans of historical fiction and for those who want mystery and suspense. The best of two worlds all in one. It's light and good. So easy to read and a book you can finish in one day. The plot will have you coming back for more.