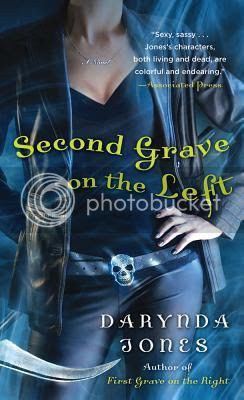 If you hang around with dead people, life can deliver a whole world of trouble. Take it from Charley Davidson, part-time P.I. and full-time Grim Reaper. The deceased find her very sparkly. Demons find her irresistible. And one entity in particular wants to seduce her in every way possible… When Charley and Cookie, her best friend slash receptionist, have to track down a missing woman, the case is not quite as open and shut as they anticipate. Meanwhile, Reyes Alexander Farrow (otherwise known as the Son of Satan. Yes. Literally.) has left his corporeal body because he’s being tortured by demons who want to lure Charley closer. But Reyes can’t let that happen. Because if the demons get to Charley, they’ll have a portal to heaven. And if they have a portal to heaven…well, let’s just say it wouldn’t be pretty.

Can Charley handle hot nights with Reyes and even hotter days tracking down a missing woman? Can she keep those she loves out of harm’s way? And is there enough coffee and chocolate in the world to fuel her as she does?

My thoughts:
First, honestly, Reyes *wipes away a bit of drool*. He is just hot as hell ;) Is just that sexy cos he is all mysterious and all, or is it cos of his origin? What can I say, he is the ultimate bad boy.

Right, I was supposed to say something about this book. Well Reyes is missing, his body that is, he still visits Charley in his other form and she wants to find him. The second part of the story is her trying to find a missing woman and that lands her in trouble again. People are gunning for her, but what else is new. She is as kick-ass and smart-mouthed as she was in book 1.

Romance, eh, not so much, sexual tension? Yes lots of it. Reyes tries to protect her so there aren't really any make-out sessions. More longing in this one. Not that that matter cos it's still awesome. Reyes is a guy that was meant to be lusted after. Not to mention he is freaky too. Darn it, there I went talking about Reyes again. I do try writing a review without mentioned Reyes' name every second but it's pretty hard. I just keep...

Ok, I had to restrain myself there. Back to business. The book was fun, I like the mix that it is, what it is? Hm, paranormal romance mixed with urban fantasy mixed with thriller and throw in a lot of humour. I really can't put a lable on it. It's amusing, that's what it is.

Conclusion:
I want book 3! Cos there was a cliffie. Not a OMG I falling of the cliff!!! More a shit, look there, someone is about to fall of that cliff.