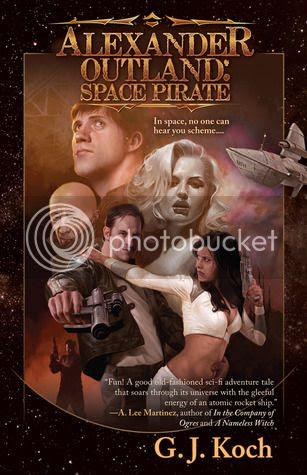 Captain Alexander Outland of the Sixty-Nine (short for Space Vessel 3369, of course) is the best pilot in the galaxy. He’s also a pirate, a smuggler, and loved and loathed by women in umpteen solar systems. His crew of strays and misfits includes an engineer of dubious sanity, a deposed planetary governor, an annoyingly unflappable Sexbot copilot, and a slinky weapons chief who stubbornly refuses to give the captain a tumble.

Outland just wants to make a decent living skirting the law, but when an invisible space armada starts cutting into his business, he soon finds himself in hot water with the military, the mob, mad bombers, and an extended family of would-be conquerors. And that’s not counting an occasionally telepathic spy . . . .

Like any sensible scoundrel, he hates heroics. They’re risky and they don’t pay well. But to keep his ship and crew in one piece, and make time with a certain hard-to-get weapons chief, he might just have to make an exception–and save the galaxy in spite of himself!

My thoughts:
Something just did not work for me as it should have with this book. I really tried to like it, I mean I love her other books, but here, no, I just couldn't fall helplessly in love with it.

Captain Alexander Outland..a pig really. Sure I like a good rake, but this guy, well it just felt like he would have picked up a few things on the way. Can’t say I loved Slinkie either, the woman he is lusting after. Though I really liked how she did not fall for his crap. And I did like that Alexander did do the right thing when it comes to everything else. He says he does not want to be a hero but he was a hero. A reluctant awesome hero. So as long as he keeps his hands to himself then he is ok in my book.

I did like the Governor though..yes, I can’t say more. And a certain crewman who made a sexbot, well good for him.

The story (even if sadly not for me), was very cool in theory. A wicked plan is set in motion in the galaxy, pirates who want everything. And the crew ending up on a military planet, one have to love a place that keeps order *laugh ironically*. It sure made it interesting and the action was sure to be had after that.

In the end I still do not know why I did not love this book. Going with my old record I should have liked Alexander, cos he really wanted Slinkie. In a good way. And the plot was amazing and kicked ass. But this time it just was not the book for me.

What others had to say:
Here is a  quote from someone who really liked it.
My World in Pages ..and more

I loved this adventure and this crew!  I CAN NOT WAIT for the next Alexander Outland book!!

So go and read Melissa's review and see the other side of the story.