Review: The Duke and I - Julia Quinn 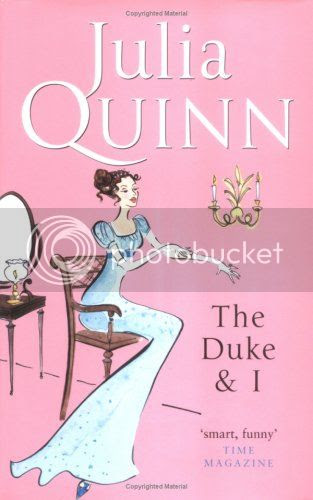 After enduring two seasons in London, Daphne Bridgerton is no longer naive enough to believe she will be able to marry for love. But is it really too much to hope for a husband for whom she at least has some affection?

Her brother's old school friend Simon Bassett - the new Duke of Hastings - has no intention of ever marrying. However, newly returned to England, he finds himself the target of the many marriage-minded society mothers who remain convinced that reformed rakes make the best husbands. To deflect their attention, the handsome hell-raiser proposes to Daphne that they pretend an attachment. In return, his interest in Daphne will ensure she becomes the belle of London society with suitors beating a path to her door...

There's just one problem, Daphne is now in danger of falling for a man who has no intention of making their charade a reality.

My thoughts:
It seems that this was not my first Bridgerton book, now I had actually read the 8th and last first, but totally forgotten about it since it had bored me a bit. I can't even remember what happened in it..a wedding and a carriage at the end? Well I am pleased to say that this one was better and it did not matter that I read out of order. Welcome to the Out of Order reading club.

Oh and I did try to read..book 3? And gave up cos I just grew angry...end of story (even if it still annoys me).

Still I do prefer her newer books, but I did enjoy this first Bridgerton books and all the siblings (8 if you are wondering). But at the moment only 4 are out and about. Daphne is nice and all, but men just want to be her friend. We all know men can be such idiots sometimes. I did like her in the book too, she was fun and I am sure we would have been friends.

The hero, well he has issues, he had stutter as a kid and the relationship with his dad was horrible. He is carrying a lot of anger. Even though we know that this well end up in a HEA there are obstacles first as he never wants to marry or have kids. Poor guy is pretty messed up.

The tone is fun and cute. They fit so well together from the very beginning. Yes Simon was an ass, yes maybe Daphne should have know better. But the drama at the end was actually one of the best parts. It seems I like an unhappy couple who has to solve a big crisis.

Conclusion:
Sweet is the word. Sweet with sugar on top, but at the end there is some salt, but then it's all sugar and happiness again.