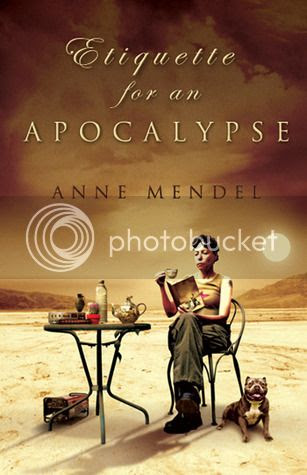 It’s the 2020 Apocalypse and Sophie Cohen, former social worker turned neighborly drug dealer, must keep her family alive amid those pesky end of the world issues: starvation, earthquakes, plagues, gang violence and alas more starvation.She investigates a serial killing and takes down the sinister emerging power structure while learning to use a pizza box solar oven, bond with her chickens and blast tin cans from the perimeter fence with a Ruger 9MM.

In order to accomplish all this she must find a way to love her mother, accept her daughter’s adulthood and reignite her moribund marriage.

She might discover that a decentralized, consensus driven life—without fossil fuels, iPhones and chocolate éclairs—isn’t the end of the world, after all.

My thoughts:
That which  made me want to try this book was the cover, I mean look at it! So cool and weird, I love it.

It's the end of the world but some are struggling to survive (it helps having a genius for a brother who can make painkillers:) It's a new world where those with a skill has survived. Sophie sells drugs, but even in this bleak bleak world the book itself does not feel overly bleak. Because the book is so much more than just another dystopic apocalyptic story. It's a story about a mother trying to do right by her daughter, a girl becoming a teenager in this kind of world. Oh yes she is not happy. About a marriage that is not as passionate as it used to be. And it's not easy to be loving when you have nothing to eat and people die around you left and right. And last, dealing with a mother who does not want to accept that the world has changed.

But the family drama and issues aside the book is also a bit of a mystery as women are being murdered and Sophie wants to find out who is doing it. Because no one else care. And by digging around in things she should not more happens, I can't go into details but it gets exciting.

A bleak world about a family trying to cope. It has this certain feel to it, bleak yet so normal. Many apocalyptic books are awesome, but in the end they are just so freaking big. So much happened, the world has changed too much. Here it feels like this could happen. A supervolcano would just have to explode and that would send ripples through out the world. This is how people would try to get by.

Conclusion:
I have said it before, but a different sort of end of the world book, one that I enjoyed and one that felt like it was happening right now.