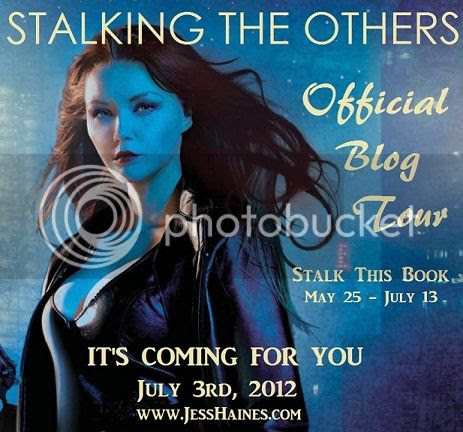 Today the Stalking the Others Blog Tour visits my blog and I am happy to have author Jess Haines over for an interview. Also be sure to check out the contest.

1. Who is Jess Haines?
Oh, you know, just the typical internet-trolling writerly weirdo.
Really—I’m just this gal, you know? In person, I’m usually quiet and fairly shy with strangers. With friends, I change gears – you’ll get a lot of obscure Hitchhiker’s Guide and Holy Grail jokes instead of awkward silence. ﻿

Let's see, what else... I'm a workaholic who loves coffee and chocolate and can't survive without books.  I'm originally from New York, but I'm currently living in Los Angeles because it is suitably weird enough for the time being.  I enjoy karaoke and bad movies, and have a menagerie of animals to keep me company when I'm not writing.  (Seriously, when I'm an old fart, I'll be known as the crazy bird/cat/fish/snake/lizard lady.)

2. What can we expect in your new book, Stalking the Others?
Mayhem. Bloodshed. Shiarra crossing some lines that will change her life forever. You know. The usual. But really, I think the back cover copy sums it up pretty well:
Vampires, werewolves, mages--the Others are very real, and wreaking havoc in Shiarra Waynest's life. But now, she's returning the favor. . .

Once, she was one of the good guys--or as close as a New York P.I. can get. Then Shiarra Waynest was drawn into the world of the Others. Every faction has its own loyalties and agenda. And Shia's recent betrayal by her ex-boyfriend means that she may be on the verge of becoming a rogue werewolf at the next full moon. . .

Of course, with all the threats against her, Shia's not sure she'll live long enough to find out. The enigmatic vampire Royce wants her back in his clutches, as do two powerful werewolf packs, along with the police. Instead of going into hiding, Shia is enlisting the aid of her enchanted hunter's belt and every dirty P.I. trick she knows. If she's going down, she'll take out as many of her enemies as she can--and hope that in the process, she keeps whatever humanity she has left. . .

3. I might have a tiny crush on Alec Royce *coughs*. Where did you get the inspiration for him? And who would play him in a movie? ;)
Me too!  *fans self*  ;)
He’s something of a conglomeration of all of the best aspects of the bad guys from a mix of movies, books, and roleplaying games I’ve played in the past.  Who doesn’t like a dark, sexy, dangerous vampire?  Of course, when they’re cliché, it’s boring.  But when you bring something new to the table—like the heroine being absolutely freaking terrified of him despite all of his “charms”—well, you know some hilarity is going to ensue.

In the entirely theoretical HUNTED BY THE OTHERS movie, I would have to say my first choice would be Robert Downey, Jr.

I hate this song, but I think it perfectly embodies everything I want to convey about that thought:

4. And that Chaz, grrr, and think I liked him (I will not spoil things for others), but had you planned this twist from the beginning?
Yup.  I’m an evil author that way. *g*
Brace yourself for a few more shockers along the way…

5. Are you writing on something new right now?
Yes, as a matter of fact!  Most of my attention right now is on completing the next book in the H&W series, but I’ve got some other stuff I’m working on, too.

If you’re familiar with the series, I’ve got a little something I’m looking for a home for right now that features Mouse, the mute vampiress, and Christoph, the dude in the fetish collar who shows up briefly in DECEIVED and again in STALKING THE OTHERS.

6. If you could not write UF, what would you write then?
Either horror or epic fantasy.  My roots are in epic fantasy, though the chances of any of the crap stuff I wrote before HUNTED BY THE OTHERS ever seeing the light of day falls somewhere between slim and none.

7.  Give me 3 reasons why people should read this series? :=)
Ohh, I like this one!
1) The heroine is completely, 100%, homegrown human. No special powers or secret half-angel/half-mermaid/half-unicorn parentage or weird supernatural secrets hiding in the closet for my special lady! Any extra benefits she gets in the process of solving her problems (such as the snark-tastic sentient hunter’s belt) are the result of magic items or temporary boosts given to her by her more, shall we say, “talented” friends.
2) It’s sadly hilarious to watch her deal with her phobia of vampires and gradually overcome her reluctance to deal with anything Other.
3) Alec Royce is a sexy beast.  Need I say more?

Thanks!
Thank you for having me and being part of the STALKING THE OTHERS blog tour, Linda!

Check out the rest of the Blog Tour
http://jesshaines.com/blog/2012/05/07/stalking-the-others-official-blog-tour-calendar/

And now to the giveaway. Enter by rafflecopter. Open to US and Canada