The seals of Shayol Ghul are weak now, and the Dark One reaches out. The Shadow is rising to cover humankind.

In Tar Valon, Min sees portents of hideous doom. Will the White Tower itself be broken? In the Two Rivers, the Whitecloaks ride in pursuit of a man with golden eyes, and in pursuit of the Dragon Reborn. In Cantorin, among the Sea Folk, High Lady Suroth plans the return of the Seanchan armies to the mainland. In the Stone of Tear, the Lord Dragon considers his next move. It will be something no one expects, not the Black Ajah, not Tairen nobles, not Aes Sedai, not Egwene or Elayne or Nynaeve.

Against the Shadow rising stands the Dragon Reborn..... 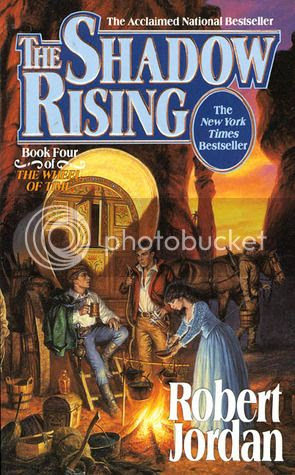 My thoughts:
What to say now about my re-read of this book.. I shall ramble on!
First of all, Rand.. Rand, Rand, Rand. I always remembered him so fondly and I did love him in later books. But here, do I love him? Not so much. He is rather crazy, keeps to himself and mumbles. Oh well, maybe I will fall once more.

Perrin, I always remembered not liking his chapters back when, but now, damn that man is cool. Slays trollocks and saves a village.

Mat, he does not have an adventure of his own yet so he is just a follower.

The women, I put them all together since they are alike. Why on earth Nynaeve and Elayne is hunting the Black Ajah I do not know. Who puts "children" after bad guys? Crazy, but done for the story. Anyway they are more fun away from everything *coughs boring White Tower*

Oh yes the boring White Tower fell and people were slaughtered. Finally it got interesting there. Gawyn is an idiot and Galad *eyeroll*

I still hope the Seanchan will go back to the hell they come from. They must burn!! Together with those all holy White cloaks. I hate people who tries to convert others and if they do not want to they are killed.

Lots happened, 1000 pages after all. Aiel, The Waste, revelations about who the Aiel really were, and meeting Asmodean, yum.

Conclusion:
So this was what I had to ramble on about. I can't review something I know too well. This seems to be more for people who know the books.