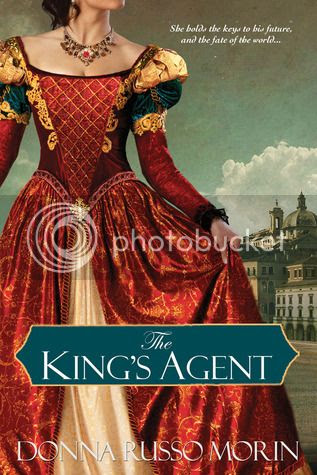 The King’s Agent is based loosely on the life of Battista della Palla-a patriotic plunderer, a religious rogue-of the 16th century, a lifelong friend to the great Michelangelo.

As the cloistered ward of the Marquess of Mantua, Lady Aurelia is a woman with a profound duty, and a longing for adventure. In search of a relic intended for the King of France, Battista and Aurelia cross the breathtaking landscape of Renaissance Italy. Clues hide in great works of art, political forces collide, secret societies and enemies abound, and danger lurks in every challenge, those that mirror the passages of Dante's Divine Comedy. It is an adventurous quest with undercurrents of the supernatural, powers that could change the balance of supremacy throughout Europe.

My thoughts:
What went wrong? Well in a way that is easy to explain; frankly I was bored. I wanted to skim, I wanted to get it over with. I just could not connect. I did like one part of the book though..after page 300 it grew interested and there was a new mystery that caught my attention. But even if that was good in the end I just did not get one thing, which I can't tell you about.

The book was a bit heavy and it's not straight up historical fiction. It has a bit of "paranormal" in it that shows up later. Not much but there is something,and truth be told since I was bored in the beginning I did not get the whole thing in the end. There is an adventure, a mystery, a hidden painting, war between France and Spain, worries in the city states of Italy, a woman that wants more from life and an art thief that is real pretty. That sums it up.

Sure it's well written but this time it was not the book for me. I wanted to like it, it had promise, but the beginning was so heavy and I just never connected (well ok at page 300 but if I did not have to review this one I would have given up before that).

Conclusion:
It was a good story, but for me, it was a boring story.