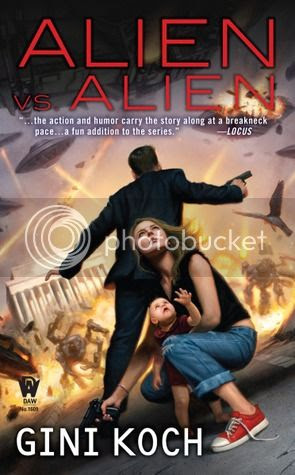 Jeff and Kitty Katt-Martini and the rest of the American Centaurion Diplomatic Corps are still recovering from their introduction to Washington D.C. politics, parties, and conspiracies. So when compromising pictures arrive, no one’s too surprised. They’re also the least of anyone’s worries.

Evil androids running amok, birds of all kinds and from all places creating havoc, a Senator trapped in an ever-tightening web of intrigue, and escalating international tensions all seem tough but manageable. But the disappearance of Jeff Martini and Charles Reynolds during the International One World Festival signals more than the usual nastiness — and it looks like even ACE can’t help them.

Then new trouble arrives in old packages and even with the best hackers in the world, beings from near and far, the full might of Earth’s military, and the Wonder Twins on their side, Centaurion Division’s outmanned and outgunned.

Now Kitty’s racing against the clock to find not only Jeff and Chuckie, but to keep the peace between Middle Eastern countries, all while searching for the bases of super-soldier operations — to stop them or die trying.

My thoughts:
As I have reviewed many Kitty books before I will try not to go into details  I just feel I have said it all already. But I will try.

The book is crazy, but if you have read Koch's books before you already know this. If you haven't then what are you waiting for? Crazy stuff is happening all over the place, Kitty is as smart (in her weird way) as ever. She has a new talent that you will get to see in action. Non stop action.

I do not know what to say, I enjoyed it. There was quite a mystery about who is bad, who is after them, what the &%& is happening? There will be aliens, androids and new freaky things to get to know. Things does not cool down in Kitty's world.

The romance, well someone will find romance. Martini seems to be cooling down on the jealousy (lol, well sort of). I missed Reader. Christopher and Amy are happy. Not much of Mama Katt. White, yay (he is so cool), Chuckie..eh, sorry but I just do not like him. Oh and there is someone..."bitchy", oh you will laugh when you see what I mean.

And the end makes me want more!