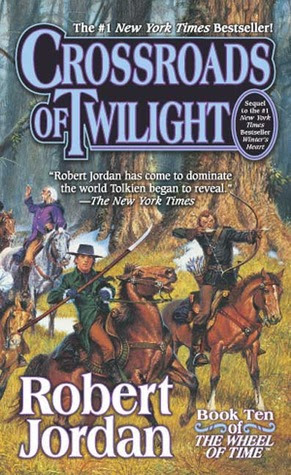 Fleeing from Ebou Dar with the kidnapped Daughter of the Nine Moons, whom he is fated to marry, Mat Cauthon learns that he can neither keep her nor let her go, not in safety for either of them, for both the Shadow and the might of the Seanchan Empire are in deadly pursuit.

Perrin Aybara seeks to free his wife, Faile, a captive of the Shaido, but his only hope may be an alliance with the enemy. Can he remain true to his friend Rand and to himself? For his love of Faile, Perrin is willing to sell his soul.

At Tar Valon, Egwene al'Vere, the young Amyrlin of the rebel Aes Sedai, lays siege to the heart of Aes Sedai power, but she must win quickly, with as little bloodshed as possible, for unless the Aes Sedai are reunited, only the male Asha'man will remain to defend the world against the Dark One, and nothing can hold the Asha'man themselves back from total power except the Aes Sedai and a unified White Tower.

In Andor, Elayne Trakland fights for the Lion Throne that is hers by right, but enemies and Darkfriends surround her, plotting her destruction. If she fails, Andor may fall to the Shadow, and the Dragon Reborn with it.

Rand al'Thor, the Dragon Reborn himself, has cleansed the Dark One's taint from the male half of the True Source, and everything has changed. Yet nothing has, for only men who can channel believe that saidin is clean again, and a man who can channel is still hated and feared-even one prophesied to save the world. Now, Rand must gamble again, with himself at stake, and he cannot be sure which of his allies are really enemies.


My thoughts:
Ok so I love this series, therefore I can say this, arghh, so bloody boring! Honestly, it works when you read it for the first time but these middle books are NOT re-read books. By the Gods no.

Rand did..something.
Elayne and Egwene makes me sleepy as always. Totally skim chapters
Perrin is trying to rescue Faile, it sure takes time.
Mat kidnapped the Daughter of the Nine moons. Whatever the snakes said I would just tosh that little bitch overboard. He has the patience of a saint.

1 million other characters plotted and did things.

So yes, not a book that was fun to re-read. Some parts yes, but then the boring peeps come and have like a 100 pages and then in the middle are all those strangers that also have a POV.

Still WOT IS THE BEST fantasy series ever!