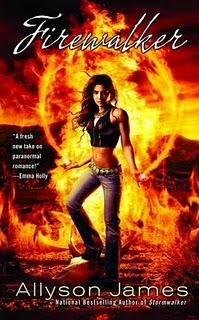 Janet Begay's Crossroads Hotel has attracted the supernatural from the day it opened. Witches, Changers, and a mouthy magic mirror have decided to make it their home. But a new, dark power is rising—this time inside Janet herself.

Her boyfriend, Mick, a sexy dragon shape-shifter the Navajo call a Firewalker, knows what terrifying magic is threatening to overwhelm Janet and her Stormwalker powers. He watches over her, ready to fight for her, to do anything to keep her safe.

But then a mysterious corpse is found near the Crossroads Hotel—and Janet becomes Sheriff Nash Jones' main suspect. Trouble is, even she can't be sure she didn't do it. Now Janet and Mick must uncover what really happened, and their investigation leads to the most perilous decision of their lives: Mick must choose between protecting his own people or guarding Janet, the woman he loves, from the many forces amassing against her.

My thoughts:
As it is the holidays I will write shorter reviews..well try to.

This time around Mick is having problems with idiotic dragons, yes those guys are not cool. I am unsure about Mick though, I like him...or do I? he is good, but, something was mission this time around.

And Janet is trying to solve a murder. Now she is kick-ass and is dealing with her powers that are tough to handle. Sure the passion is there between these too, but...

Conclusion:
I still can't think of this as just pnr, I am naming it PNR UF mix. And I do want more even if it was not fantastic.