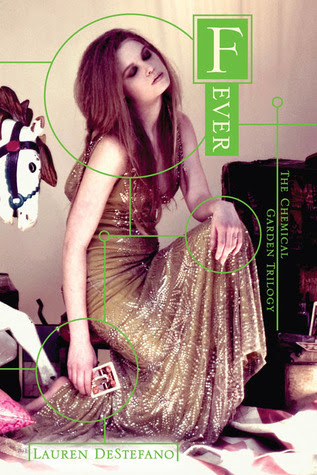 Running away brings Rhine and Gabriel right into a trap, in the form of a twisted carnival whose ringmistress keeps watch over a menagerie of girls. Just as Rhine uncovers what plans await her, her fortune turns again. With Gabriel at her side, Rhine travels through an environment as grim as the one she left a year ago - surroundings that mirror her own feelings of fear and hopelessness.

The two are determined to get to Manhattan, to relative safety with Rhine’s twin brother, Rowan. But the road there is long and perilous - and in a world where young women only live to age twenty and young men die at twenty-five, time is precious. Worse still, they can’t seem to elude Rhine’s father-in-law, Vaughn, who is determined to bring Rhine back to the mansion...by any means necessary.

My thoughts:
I can't even snark that much as nothing happened in this book, and people were drugged much of it too. Hug disappointment.

But first, really..really?! She ends up in a brothel. But does she get sold to the next costumer. Oh no, of course not, instead she gets put on display. Now that is just bad business. If the girl is that damn pretty and special then sell her body. But we can't have that happen to our heroine. So do not let her end up there then. It set the tone for the book and I did not like it. This is supposed to be a horrible future and she *big eye roll*. Lame.

The other problem with the book was that I did not care. Book was tough provoking, here I did not care either way. Women dying at 20,whatever. Women sold to slavery, yawn. Yes you can see my problem. The whole book suffered for it. Nothing happened, she talked with Gabriel (did I feel they were in love..no.) Scary evil father-in law, well ok he was good, cos he was actually evil. The only good thing is the mad scientist.

Conclusion:
And how is this series gonna end. Oh I am sure she is the cure for it all. Did this book made me want to read the next? No thanks. I mean, it was still ok, cos I finished it in no time. It was simple.