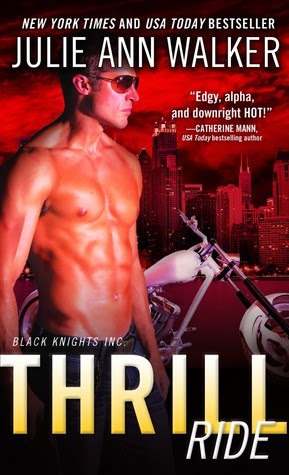 He's Gone Rogue
Ex-Navy SEAL Rock Babineaux’s job is to get information, and he’s one of the best in the business. Until something goes horribly wrong and he’s being hunted by his own government. Even his best friends at the covert special-ops organization Black Knights Inc. aren’t sure they can trust him. He thinks he can outrun them all, but his former partner—a curvy bombshell who knows just how to drive him wild—refuses to cut him loose.

She Won't Back Down
Vanessa Cordova hasn’t been the team’s communication specialist
very long, but she knows how to read people—no way is Rock guilty of murder. And she’ll go to hell and back to help him prove it. Sure, the sexy Cajun has his secrets, but there’s no one in the world she’d rather have by her side in a tight spot. Which is good, because they’re about to get very tight…

My thoughts:
This is a book about running, running for your life and making out in the jungle a bit ;)

Rock is a member of the Black Knights and made a few mistakes. Now he is running. He also have some issues from the past that makes him not wanna love again. You can see where I am going with this.

Vanessa is also a member of the Black Knights, just not the shooting and fighting kind of Knight. No, she is smart, and knows her languages. She also likes Rock a lot, and jumps at the chance to find him as the Knights and the CIA are trying to catch him. We all know she is gonna find him so I am just gonna tell you she does. There is running, hiding, bad guys gunning for them and the whole conspiracy why he is on the run is slowly emerging. And of course there is the "romance", that is she wants to, he does not.

Conclusion:
A thrilling book about a man not ready for love, and one woman sure ready to give him the world.