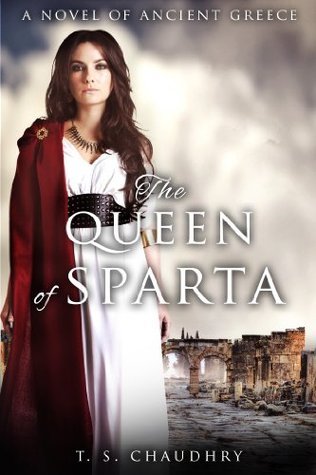 Author: TS Chaudhry
Title: The Queen of Sparta
Genre: Historical Fiction
Pages: ebook
First Published: February 2014
Where I Got It: My shelf (Given to me by the author/publisher for my honest and unbiased opinion)

"Xerxes, the Great King of Persia invades Greece in 480 B.C. at the head of over a million barbarians. 300 Spartan’s led by King Leonidas die heroically blocking the Persian advance at the pass of Thermopylae. The Persians are poised to conquer all of Greece.


The only one standing in their way is a woman – Gorgo, Queen of Sparta. Though history has relegated her role to an interested bystander, what if she played a central part at the heart of the Greek resistance to the Persian invasion. What if she kept her true role a secret in order to play it more effectively? What if she was hiding other secrets too – dark secrets of murder and vengeance? What if the only person who truly appreciated her genius was an enemy prisoner? What if after their victory, the Greeks start to turn on each other? What if, eventually, Gorgo has to choose between the security of Sparta and safety of her son? And what if the only one who could find a way out is the same prisoner whom she has vowed to kill?"

Ooooh I do love Sparta. Honestly, out of all the city-states, I think I would want to live there. Don't ask me why, but I have always been fascinated by the Spartans - maybe it was because I went to High School that's mascot was the Spartan. Whatever the case, whenever I see a book about Sparta, I need to read it.

Poor Gorgo. She loses her husband and then is left in charge of Sparta in the mist of chaos. However, she had the whole issue of being a woman, so she had to pretend to let others rule, while she was secretly in charge. So dumb, but alas, thus was the times.

There is a lot going on throughout this book and a lot of characters. Sometimes it was overwhelming with all the characters, so the author was nice enough to have a reference page with all the names and who they are and what side they are on (I recommend using it if you forget who is who). Even someone, like me, who studied this time period and war, its still easy to not know someone (there are a couple made-up people running amok). I do wish the POV JUST stayed with Gorgo, I didn't care for Sherzada's POV. He annoyed me and I'll admit it...I totally skimmed over his parts. 0.0 I know, I know.

Overall, this was a pretty good read. There was a lot going on and a lot of characters running around during this time of war and chaos. It helped a lot that there was a character reference page just in case. I loved Gorgo and I want to read more about her! She was such a strong and smart woman. I recommend this for those that love historical fiction set in Ancient Greece. Out of five stars, I stamp this with 3 stars.


Not-so Favorite Character(s): Xerxes & Sherzada (I just didn't really care about him or his POV)