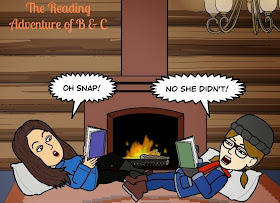 Hello all! Carole and I will be discussing "The Gospel of Loki" by Joanne M Harris. I am in red and Carole in purple/black. 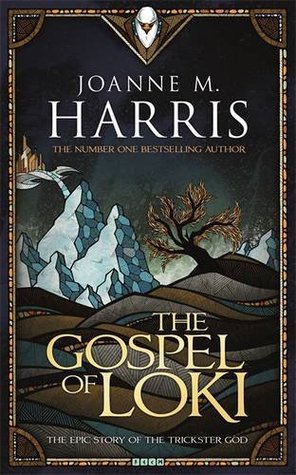 The novel is a brilliant first-person narrative of the rise and fall of the Norse gods - retold from the point of view of the world's ultimate trickster, Loki. It tells the story of Loki's recruitment from the underworld of Chaos, his many exploits on behalf of his one-eyed master, Odin, through to his eventual betrayal of the gods and the fall of Asgard itself. Using her life-long passion for the Norse myths, Joanne Harris has created a vibrant and powerful fantasy novel. Loki, that’s me. Loki, the Light-Bringer, the misunderstood, the elusive, the handsome and modest hero of this particular tissue of lies. Take it with a pinch of salt, but it’s at least as true as the official version, and, dare I say it, more entertaining. So far, history, such as it is, has cast me in a rather unflattering role. Now it’s my turn to take the stage. With his notorious reputation for trickery and deception, and an ability to cause as many problems as he solves, Loki is a Norse god like no other. Demon-born, he is viewed with deepest suspicion by his fellow gods who will never accept him as one of their own and for this he vows to take his revenge. From his recruitment by Odin from the realm of Chaos, through his years as the go-to man of Asgard, to his fall from grace in the build-up to Ragnarok, this is the unofficial history of the world’s ultimate trickster.

I do not know what I expected, but what I got what not anything new. It was Loki’s story, riding on the Marvel wave.

I was not sure what to except myself when I picked this up. I like Loki and all the gods, but I went in a little blind. Haha

I was pretty bored, all the way through. She tried wayyyyyyy too hard.

Yeaaa I got bored after about 25%. The first chunk was actually decent. I was enjoying Loki and everyone else. After a while though, I started rubbing my eyes and wanted to be done. This felt like a bunch of short stories shoved into one book. I was not sure what the whole point was. There didn’t seem to be any real plot. Just a bunch of random Loki scenes shoved into a book. I think a short story would’ve been better.

First I thought it was me (but then you felt the same). I was all, these are just the same stories my ancestors told each other during long winter nights. She was re-telling old Norse Sagas and putting in emo girls and angsty teens. And she managed to make it dull. Because there are a bunch of short stories, that is how it was told. She did not manage to make it flow.

There was no flow at all. She certainly tried too hard honestly like you said.

Did she want to to be funny? I really do not know what kind of vibe she was going for. Loki was a sleazebag. Ugh, what a dick!

There were times she tried the funny angle and then a serious angle. There was no flow so it felt like chunks. LOL I did enjoy Loki being an asshat but it did get old. Even this was overdone and made it boring after a bit.

She should have been funnier? Oh I do not know. Something crucial was missing. She should have gone all the way with her emos and angst perhaps. Now she told the same story with a little extra detail. Loki is a weirdo, it could have been fun, I mean he gives birth to a horse! That is funny! Make us see that instead lol. Yes makes us see the things we did not see.

Haha he was a weirdo for sure. Yessss it would’ve made this a hair better to see instead of being told. I loved the scenes when we got to see things happen. I enjoyed the dialogue moments.

Maybe you are onto something. She tried doing the Saga, but what was needed was an actual freaking book with dialogue and a scene of him giving birth (omg  I am stuck on that, but hell it would have made it interesting).

That would’ve been hilarious!!!!

And him seducing that horse, then running around for however a horse is preggers doing horsey things and then the road back with the horse being all ooops I did it again!

Ugh! I’m so mad. I would’ve loved to laugh at that scene. This had such a good skeleton for a good book.

Also what I did not like at all was this BS about him being wildfire and born in some Chaos dimension. He was a giant, his parents was giants, hey, do not mess with my ancestors religion woman!

I get taking liberties and whatnot buuuuuuuuuuuuuut there are lines and there should be some respect to the old. Especially since there are groups that still follow this religion.

Why even change that? It made me irritated. Giants are fan and evil. I am sorry, are they not scary enough for you so you had to make him into a demon? Giants were mortal enemies to the Gods.

Yeaaaaa. I get she was trying something, but why reinvent the wheel? Stick with the old, good stuff and maybe change how things happen. IDK.

Ohhh I did read a good re-telling once. The author made it so that all this was real, but happened long ago and then the tales got re-told as the tales of the gods. So there was some historical woman doing whatevs, I only read the one, then it got depressing when we came to the Freya book.

I think I read a re-telling once ages ago and it was good (from what I remember). But yeah...I barely remember what happened at the end. I was so tired and ready to be done.

Agreed. I honestly think this would’ve been better as a short story. Too fanfictiony for my liking.

Too “I am being clever and making Hel emo, hah, I am laughing at myself here”. ;)

Hahaha that covers it real well.

So, not recommendation from either of us then ;) Waste of time. Better luck next time!!

Yesss, the first 25% was good but it went downhill from there. I wouldn’t mind trying something else by the author possibly but we shall see.

*coughs* Maybe before, but not anymore *coughs*

Hahaha true. That is keeping me at bay. ;)

Yesss, the end. Until next time! We need a good one! It has been a hot minute.

We need to do some serious thinking

Yes. We have to strike gold soon. We’ve had a lot of mehs the last few months. 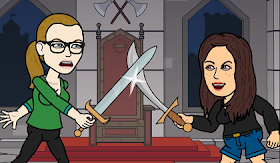