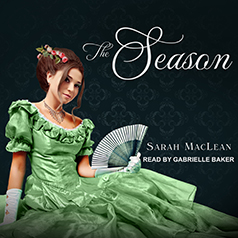 
My thoughts:
I remember seeing this one long ago, and wanting to read it. Mostly cos it was a YA his rom.

Alex is a smart young woman filled with opinions. Not a good thing when you are about to have your first season. She is headstrong. Has 3 annoying brothers and 2 besties. What more can a girl want.

The two best friends Ella and Vivi sadly do not get enough room in the book. It did feel like this was a novel that should have had follow ups. You know, when Ella and Vivi finds love too. But I say they found it with Alex's brothers...what? I want HEAs since there are no more books ;)

There is also Gavin, the next door neighbor who suddenly is a man, and no longer that 4th pretend brother.

Balls, dresses and drama. Someone is after Gavin (and not to marry him). Of course I still say they should have told their fathers and let it be, but hey, I did say she was headstrong.

I get that it was YA, but she did roll her eyes a bit too much. It felt too teen, too modern, too disrespectful.

Conclusion:
But it was a fun tale and it would have worked just as well as a adult his rom. Just then insert more passion and less eye rolling ;)

Narrator
I do like Baker's voice. She is cheerful! And perfect for YA

Blurb:
Seventeen year old Lady Alexandra is strong-willed and sharp-tongued; in a house full of older brothers and their friends, she had to learn to hold her own. Not the best makings for an aristocratic lady in Regency London. Yet her mother still dreams of marrying Alex off to someone safe, respectable, and wealthy. But between ball gown fittings, dances, and dinner parties, Alex, along with her two best friends, Ella and Vivi, manages to get herself into what may be her biggest scrape yet.
When the Earl of Blackmoor is mysteriously killed, Alex decides to help his son, the brooding and devilishly handsome Gavin, uncover the truth. But will Alex's heart be stolen in the process? In an adventure brimming with espionage, murder, and other clandestine affairs, who could possibly have time to worry about finding a husband? Romance abounds as this year's season begins!