Priest of Lies by Peter McLean 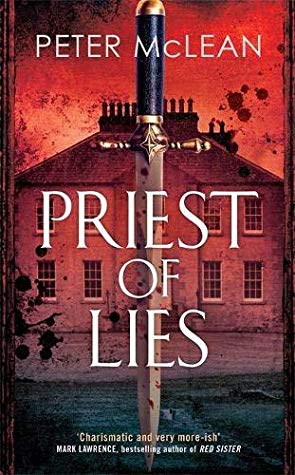 I am having a hard time starting this review. You know those books that are great and when you finish you die a bit inside. Because what should you now do with your life? The book is over, and to move on to a new one feels cruel, and disrespectful to the one you just finished.

And to write a review about a great book is just so hard too! Cos your word can never do it any justice.

Book 1 was amaaaazing. This book was great too, though it can't beat book 1, sorry, book 1 will always be one of my favs. You have to take that one from my cold dead hands! When I finished this book I just went dang, this city is going to hell. I have no idea what will happen next, no idea! Sometimes it is easy to guess, or at least make some kind of guess, but there, no, the situation is....oh it is a tricky one. Thomas, Thomas, Thomas, what did you do!?

Please brain, scramble together a sentence that makes sense!

Ok, so Thomas is a gangster, a boss over his area. In constant fights with other bosses. But in book 1 he married an agent of the Queen and got a posh new house. But he is still a gangster, he has still blood on his hands, and he still kills. Just think Godfather meets fantasy. He moved on up, but he still goes into the streets too. Justice needs to be served.

The book is light in writing, and that does not mean in tone. Nope, dark as night, lots of killings and butchering people. But the writing is just so easy and it flows, I read it fast and fell into it so easily. It sweeps you away, in the gutter of the city.

I like Thomas, I would not want to meet him, but I like him. I respect him, he does well by his people, he tries, and when he sees something he does not like it tries to fix it. With most dark books like this the main character would not care for the brothels or kids in the streets. But he does take offence if someone tries to hurt someone. And for that I respect him.

And the streets are bloody and dark. This city feels muddy and grey, in the best kind of way. You are there, and you do not want to live there.

There is action, there is preparation, there are even balls in the capital. And he is such a fish out of water. I enjoyed it all.

And then the end, no not a cliffie, but something new happens that throws the me for a curveball. And it leaves me wondering, what next? What could possible happen. Also please let him be happy! I am an optimist and well, I want him to be happy! And being able to relax for a second, I mean the poor guy has ptsd, his wife is not really his wife, and people are trying to kill him.

See, I blabber, this is so hard.

This is a great series. You really should try it. I am not one for dark books, but even in its darkness it does not feel dark to me. I see a light. There are great characters, and what can I say, "As far back as I remember, I always wanted to be a gangster." A fantasy mafia book, seriously, what is there not to love! If this was a tvseries it would be gritty and dark, when reading, it is so much better.

Gangster, soldier, priest, you have never met someone quite like him. Read and find out.

People are weak, and the poorer and more oppressed they are, the weaker they become--until they can't take it anymore. And when they rise up...may the gods help their oppressors.
When Tomas Piety returned from the war, he just wanted to rebuild his empire of crime with his gang of Pious Men. But his past as a spy for the Queen's Men drew him back in and brought him more power than he ever imagined.
Now, with half of his city in ashes and the Queen's Men at his back, the webs of political intrigue stretch out from the capital to pull Tomas in. Dannsburg is calling.
In Dannsburg the nobility fight with words, not blades, but the results are every bit as bloody. In this pit of beasts, Tomas must decide once and for all whether he is truly the people's champion...or just a priest of lies.