Audio. The wolf and the woodsman by Ava Reid 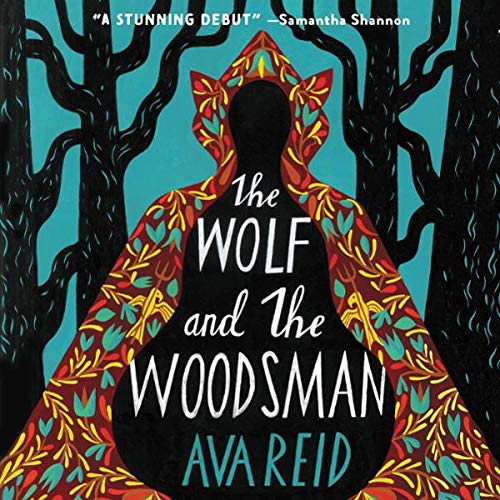 I really enjoyed this one. But then I am all for as many monsters as possible in my fantasy.

Evike is a pagan, everyone else in her village has powers, she does not. It is not easy for her, and I would let that stupid village rut. She is half Yehuli too (Jewish), so the strikes keeps on coming. I liked Evike, even though I felt that for someone that is 25 she sure acted like 17 at times. This is an adult book, but yes she could easily have been a teen and this YA. She does make stupid decisions, and if this is fantasy then she is practically middle aged already.

Omg, so much happens, how will I cram it all in!

So her village is filled with asshats and they offer her up as a sacrifice so off she goes with the woodsmen. Ugh her village, srsly, Evike was too nice.

So this world, fake fantasy Hungary is ruled by a king whose ancestors have conquered nearby pagans. Pagans should be killed screams some, since yes this fantasy world is ruled by a certain fantasy religion. And there is nothing I despise more than zealots. We are right, everyone should burn! Grrr, they make me so angry. Evike and her asshat village are peaceful and kind. And just cos they do not believe some fake god then they are bad. They believe what they can see, like all the monsters out in the woods (there are plenty), and the magic they craft. And put in some Yehuli (already told you who they are), who are also persecuted cos of their believes.

This world, even if it does borrow a lot, was just so wonderful. Creepy monsters, interesting magic, and ugh zealots! And political intrigue. Gaspar, the rightful heir, had a foreign mother so now he is a Woodsman (hunting monsters, killing pagans), his father the king a real piece of work, doomed him to it. And he has a creepy brother who is the biggest fanatic of them all and wants it all for himself, but since he is a bastard (literally), that can't happen.

I just keep going with this review!

Gaspar and Evike hate each other, tolerate each other, likes each other a tiny bit, and more develops. I liked their journey to the capital, she kept telling these stories and I like a story within a story.

What more, it seems that the country up north is fantasy Finland? I mean cold, reindeer, the finnish name for sky, the count from that part has a Finnish name. I mean I did listen to the audio so I could be wrong, but Hungarian and Finnish are related so yes why not make them closer in this fantasy world.

I mentioned Evike acting young and it feeling YA then, but you know what, the end, that was pure adult. It was a good happy ending, but it was a real ending, and the only ending I wanted. It stayed true to this world.

A fantasy book I could recommend to everyone

I liked Saskia, she is a great narrator and she does a wonderful job with this world. I am right there with them, she gives voices to everyone and catches the feel of the book. Perfect for audio

In her forest-veiled pagan village, Évike is the only woman without power, making her an outcast clearly abandoned by the gods. The villagers blame her corrupted bloodline - her father was a Yehuli man, one of the much-loathed servants of the fanatical king. When soldiers arrive from the Holy Order of Woodsmen to claim a pagan girl for the king’s blood sacrifice, Évike is betrayed by her fellow villagers and surrendered.

But when monsters attack the Woodsmen and their captive en route, slaughtering everyone but Évike and the cold, one-eyed captain, they have no choice but to rely on each other. Except he’s no ordinary Woodsman - he’s the disgraced prince, Gáspár Bárány, whose father needs pagan magic to consolidate his power. Gáspár fears that his cruelly zealous brother plans to seize the throne and instigate a violent reign that would damn the pagans and the Yehuli alike. As the son of a reviled foreign queen, Gáspár understands what it’s like to be an outcast, and he and Évike make a tenuous pact to stop his brother.

As their mission takes them from the bitter northern tundra to the smog-choked capital, their mutual loathing slowly turns to affection, bound by a shared history of alienation and oppression. However, trust can easily turn to betrayal, and as Évike reconnects with her estranged father and discovers her own hidden magic, she and Gáspár need to decide whose side they’re on, and what they’re willing to give up for a nation that never cared for them at all.