Early Audio review: The Duke is back - Valerie Bowman 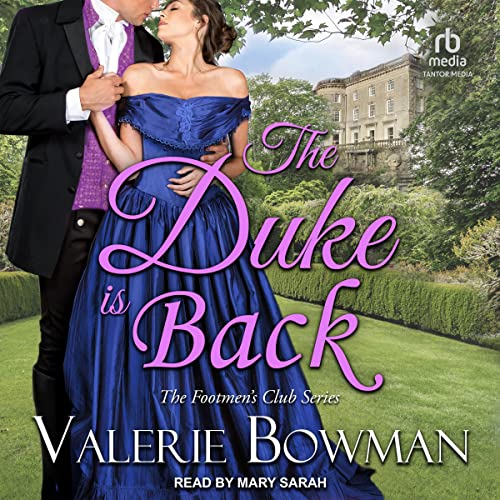 Philip suffers from severe ptsd, and on top of that his brother suddenly dies. Yes something is fishy and he wants the truth. S.o he comes out of hiding, since everyone thought he was dead too. Ok so I get why he had to hide, but all those poor people who thought he was dead!

And there is where the drama lies. Sophie loved him,he went to war, she thought he was dead. Her family pressured her to get engaged. To his cousin, oh the drama.

And she is pissed when he comes back. Like who wouldn't. What where you thinking Philip!?

He wants her, but he has issues. She does still love him, but so much is in the way.

There is a murderer to catch, and danger ahead of them. It was a short book, but it packed romance, danger and more. A nice story. They both deserved some happiness.

This was my second book with this narrator in a row, funny how that happened. It was fun listening to another one by her

Miss Sophie Payton might be engaged, but she’s not in love. The only man who ever captured her heart was Phillip Grayson—a soldier who was slain a year ago. But when her stepmother decrees that Sophie will marry Phillip’s cousin, the new Duke of Harlowe, Sophie’s in no position to refuse.

The ton thinks Phillip Grayson died a hero on the battlefields of Europe, but he’s very much alive. While he spent the last year recuperating from his grave injuries in secret at his friend’s estate, his brother was murdered, his cousin took over the title of duke, and the woman he loved—the one he dreamed of every night—apparently moved on without him.

Phillip has returned to London intent on reclaiming his brother’s title and making the people who killed him pay. He doesn’t understand how Sophie could have betrayed him; she can’t forgive him for letting her believe he was dead. And yet neither can deny that the attraction between them burns hotter than ever. Nothing is as it seems, but perhaps the truth can save them…if it doesn’t kill them first.