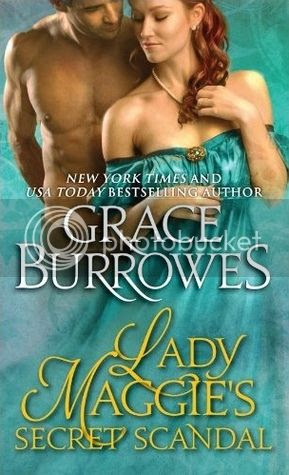 Maggie Windham, oldest of the Windham sisters and a by-blow from His Grace’s pre-marital wild oats, finds herself in desperate needs of an investigator to help her retrieve a missing reticule. Benjamin Hazlit knows the Windham family secrets, and can be trusted to keep them to himself, so Maggie turns to Benjamin, though it means ignoring his too-broad shoulders, his too-knowing smile… and his too-skilled kisses.
As Benjamin starts the search for Maggie’s missing purse, he realizes two things: First, whatever was in that purse, its loss has Maggie not just rattled, but terrified. Second, Benjamin will go to any lengths to see Maggie’s peace of mind restored, even if it means he must keep himself in very close proximity to the shy, secretive lady who says she wants nothing to do with him.

My thoughts:
Burrowes books are always so easy to read, they just flows, even when you get annoyed at the characters ;) But then again it would not be that easy to get me to marry you either if I just met you.

Maggie is the bastard daughter, still she is adopted and loved. Oh and she is 30, oh yes 30, I loved that. She is firmly in the shelf and she does not care cos she wants her independence. And with a mother who was a courtesan *coughs whore* I do get why she wants her freedom. I like an author that takes a chance with an older heroine.

Benjamin is someone we have seen around in previous books, he finds missing things, he digs up dirt on people. Not your usual kind of hero and of course I like him, because he is nice. So very nice and kind. He wants to protect Maggie and as in previous books he is the one who tries to make her see that  they would be good together. I always love a hero who fights for that which he believes in.

Sure, one thing was silly but I got it, it was there to bring the drama forwards. Maggie is kind and loving and scared. That is why the big scandal is a secret. But with a talk she could have saved herself from much grief. Even I knew that something we found out could not be. And I did not really see what the scandal was about either. She is a walking scandal herself. Still was the whole deal does it brings the drama and the fear that everything will go downhill from now. That is exactly what kept me reading. I wanted to know if everything would work out and if they would live happily ever after (which they always do but a good authors makes me fear it none the less. )

Conclusion:
I can't say what made it so, but this was my favorite Grace Burrowes book to date. Light, exciting and with a happy ending that will make you smile.