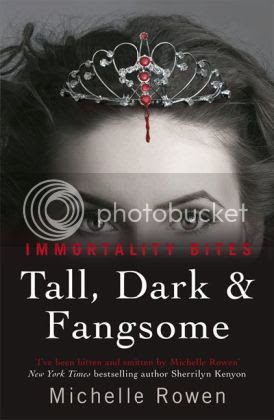 Sarah Dearly's positive attitude is waning. Perky and bubbly no longer describe her and frankly being a vampire is the least of her worries. Gideon Chase, leader of all vampire hunters, is being consumed by Hellfire and his only hope is that Sarah will bite him during a ritual under the full moon and turn him into a vampire. To ensure her help he has threatened to kill all the people she loves, inc. Thierry, her master vampire boyfriend and she has no doubt that he can and will do it. He has also demanded she break things off with Thierry and never see him again, which she pretends to do but it isn't easy to protect someone when you're forced to keep your relationship a secret. However Sarah isn't the pushover she used to be - in fact, she was recently cursed to be a nightwalker and when she removes the magical necklace that keeps her hungers in check, she's as dangerous as any blood-thirsty, horror-movie vampire and not just a girl-next-door with fangs. However, her nightwalker self is becoming dangerously attracted to Gideon. Can she cure herself of the curse in time to destroy Gideon and save her true love, so they can live happily together forever?

My thoughts:
I found that this was the last one, oh that is what I get for starting a series at book 4 ;) and then reading book 5. But at least I can go back and read the first one.

Where to start then. Our dear heroine Sarah is in trouble. In this book she has a dark side and a light side. The dark side is clearly an idiot so that is not the side to root for. As she has been cursed to be a bloodthirsty monster by a witch. I actually liked the bad side in a way too, it was a good bad side. And her true self is sad cos the evil guy made her break up with Thierry. Brooding ancient Thierry who is all hot..and well brooding.

As for the evil guy he is around quite a lot, Gideon, vampire hunter, ass and plagued by hell fire (he deserves it). But he is a charming snake and that makes it hard to hate him.

The action in this is all about Sarah being blackmailed by Gideon. Trying to survive with her curse, missing Thierry and happy banter with friends. Because the book is light and that is why I like it. Light paranormal works so well for me. I read them fast and they are relaxing for my brain.

Conclusion:
Light with a happy ending. All is well that ends well. Candy for the brain.