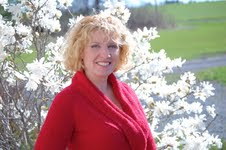 On my blog today I interview Jayne Fresina and I will be giving away her new book.

1. Who is Jayne Fresina?
JF: She is a woman who shuffles around the house in worn-out woolly socks, doesn't own a solitary t-shirt that isn't stained, talks to herself, drinks too much coffee, would work for coconut cake and foot massages, eats hot peppers straight from the jar and spends five hours a day writing to maintain a relative degree of sanity. She does not "do" housework or cook—a fact her mother-in-law will verify. As a child she performed weekly shows from a cupboard in her bedroom. One such performance was a one-woman version of "Jaws" complete with a musical interlude for ice-cream. But entertainment for her family is now limited to occasional webcam shenanigans since they are all far apart. Her sisters remain unimpressed by her writing career and only approve of her wicked stories when they can be assured the heroine is based on them. Mostly they claim to have no clue where she gets her ideas. She doesn't know either.

2.  Could you tell me about your new book, The Wicked Wedding of Miss Ellie Vyne?
JF: This is the sequel to The Most Improper Miss Sophie Valentine and follows the love story of Sophie's badly behaved friend, Ellie and James Hartley, who was once Sophie's fiance. Ellie is quite a wild character who has been engaged more times than she cares to recall, but never been in love. James is a notorious rake just beginning to realize that he won't be able to escape marriage forever. They've known one another —and sparred with one another—for seventeen years. As the book begins, Ellie and James meet up again at a turning point in their lives, when they're both coming to terms with "retirement" from their former wicked ways. But of course they both have different ideas about settling down. When James suddenly gets the idea to marry Ellie, keep her out of trouble and gallantly save the rest of the male species from her antics, she isn't going to make it easy for him - or go quietly to her fate.

3.  Ellie is not a typical woman of her time. Was she fun to write?
JF: Very! I loved her immediately when she made an appearance in Miss Sophie and couldn't wait to write her story. Nor could she wait to tell it! She wanted to make sure the details were all correct and that a certain gentleman wouldn't try to twist things around.

4. How come James is her child-hood nemesis?
JF: The Vynes and the Hartleys have been feuding for years, ever since Ellie's step-uncle had a scandalous affair with James Hartley's mother, breaking up a marriage. The two families have blamed each other for any ill that befell them ever since. Ellie and James both grew up being warned to stay away from each other. But as Ellie says, "No child of ten should be warned not to do something, for then they are most certainly obliged to do that very thing." Unfortunately she once came upon James, fast asleep under a tree, and decided to decorate his face with an ink moustache. He was unaware of it for an entire day, as no one dared tell him. James never got over the humiliation and from that point on it was war. When Ellie made her debut at the age of sixteen, she overheard James making fun of her plump, graceless figure and ridiculing her to all his friends. She made up her mind, there and then, to get her vengeance one day.

5. Tell me 3 things why James is the man to want..
JF: He is loyal, thoughtful and very determined when he makes up his mind. He is also a much nicer and more deserving person than he thinks he is - just needs someone to make him see it. Oops, that's more than three.

6. What is coming next from you?
JF: Lady Mercy Danforthe Flirts With Scandal will be released in June 2013 and Miss Molly Robbins Designs a Seduction comes out after that to complete the Sydney Dovedale series. Both Mercy and Molly appear as children in The Wicked Wedding of Ellie Vyne, so readers will get to know a little about them and how they became friends. Once this series is complete I have another in the works with the same publisher (Sourcebooks), which will be set in a slightly earlier period (1815) and follow a new cast of characters - a group of young ladies who form ”The Bookworm Belles Society.” 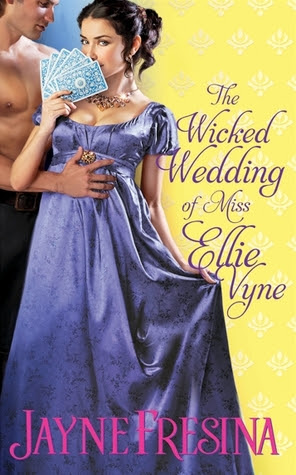 GIVEAWAY
1 copy of The wicked wedding of Miss Ellie Vyne

Open to US and Canada
Ends Feb 7
Just enter :)

When a Scandalous Lady…
By night Ellie Vyne fleeces unsuspecting aristocrats as the dashing Count de Bonneville. By day she avoids her sisters' matchmaking schemes and dreams up torments for her childhood nemesis—the arrogant, far-too-handsome-for-his-own-good James Hartley. Her latest prank: "winning" the Hartley diamonds in a card game from James's mistress.

Steals from a Notorious Rake…
James finally has a lead on the thieving Count de Bonneville, tracking him to a disreputable inn. He bursts in on none other than the brazen, irritating, nearly naked Ellie Vyne. Convinced she is the count's mistress, James decides it's best to keep his enemies close. Very close. He must get those diamonds back, and seducing Ellie will be the perfect bait.

It Can Only End in a Wicked Wedding…

Praise for The Wicked Wedding of Miss Ellie Vyne:
“[The characters] banter and quibble with comic perfection...” —Publishers Weekly

ABOUT THE AUTHOR
Jayne Fresina sprouted up in England, the youngest in a family of four girls.  Entertained by her father’s colorful tales of growing up in the countryside, and surrounded by opinionated sisters— all with far more exciting lives than hers— she’s always had inspiration for her beleaguered heroes and unstoppable heroines. Her next novel in the Sydney Dovedale regency romance series, Lady Mercy Danforthe Flirts with Scandal, will be in stores in June 2013. For more information, please visit www.jaynefresina.com and check out her blog: http://jaynefresinaromanceauthor.blogspot.com/.