Carole Reviews: Love will make you drink & Gamble, Stay out late at night 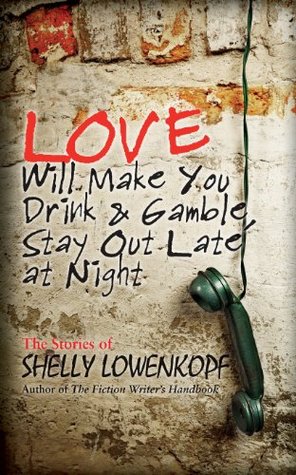 Author: Shelly Lowenkopf
Title: Love Will Make You Drink & Gamble, Stay Out Late at Night
Genre: Short Stories, Fiction
Pages: 186
First Published: February, 2014
Where I Got It: On my shelf (Given to me by the author/publisher for my honest and unbiased opinion)

"All the stories revolve around life in Santa Barbara, the oceanside city north of Los Angeles, where people go after they've burned out in San Francisco and L.A. But there's no safe haven anywhere. Interwoven into Santa Barbara's picturesque setting, the people in these twelve stories reveal what their hearts and souls encounter in relationships. Their misreadings, mistakes, and misadventures bare what happens to people who love another."


Like earlier stated, I was given this book by the author/publisher for my honest and unbiased opinion.


This book is a collection of short stories written by Shelly Lownkopf. They all revolve around life in Santa Barbara. All the short stories also reveal the messy thing we call "love". These stories are a like, but ooooh so different. For this review, I shall divide it up by short story and talk a little about it.


It was really good, but the ending was a little confusing. I had to read the last page a couple of times. 2 stars

Mr. Right
I totally did NOT expect the huge twist. It was a little awkward when I figured out what was happening, but sort of cute. It was also funny and a little random, but I liked it. 4 stars

I've Got Those King City Blues


Ugh, I wish this was longer! This was one of my favorites, but ooooh I wanted to know more! 5 stars


The ending made me really have to think. The ending was really sad once I realized the true measure of what happened, but I really liked this one as well. 4 stars


Very cute and on my top 3 of favorites. The ending was fantastic! Asher was kind of creepy, but cute at the same time. Is that possible? 5 stars


Hahahaha. Wow. This one was cute, but a little creepy. xD You'll see what I mean when you read it, I don't wanna spoil it. 3 stars


Ooooh I had mix feelings about this one. It was sad, but happy, but really sad when you think about it. I felt bad for the dog and for the owner. All of this, however, is very symbolic of love itself, I believe. 3 stars


A very sad story. Poor Langer. I know he really messed up a long time ago with his girl and he has truly regretted it since then. It's been YEARS (I'm assuming) and the girl just can't let it go and give the older and wiser Langer another chance. Super sad. 5 stars

Love Will Make You Drink and Gamble, Stay Out Late at Night


Another one where I had mixed feelings about. I felt bad for the "couple" in here, but I feel like they just wanted love soooooo bad that they didn't care with who or what the who does. I'm not spoiling anything. 4 stars


A great ending! This was a fantastic way to end not only the story itself, but to end the book. I liked it a lot. 5 stars


Overall, this was a good collection of stories. There were a couple I didn't really like, but the vast majority were awesome. I loved the fact that all of these centered around Santa Barbara. I feel that a few of the characters may have passed each other; especially I noticed that the Xanadu (spell?) Coffee shop was mentioned a couple of times. I'm thinking that all these stories happened in the same time frame. That would be epic! This could make a cute movie (a couple may have to be cut out for timing purposes and too many characters running around will confuse the audience).

I recommend this to those that like short stories about everyday people struggling with love in some sense. Each of them had different, but similar stories. It's cute. Out of five stars, I shall give this 4 stars (I found the average of stars).