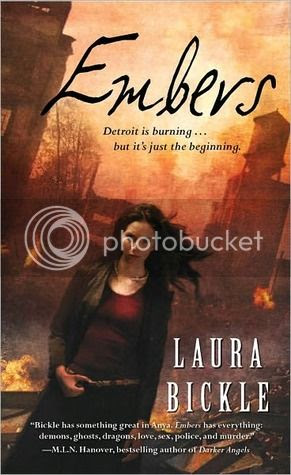 Truth burns. Unemployment, despair, anger—visible and invisible unrest feed the undercurrent of Detroit’s unease. A city increasingly invaded by phantoms now faces a malevolent force that further stokes fear and chaos throughout the city. Anya Kalinczyk spends her days as an arson investigator with the Detroit Fire Department, and her nights pursuing malicious spirits with a team of eccentric ghost hunters. Anya—who is the rarest type of psychic medium, a Lantern—suspects a supernatural arsonist is setting blazes to summon a fiery ancient entity that will leave the city in cinders. By Devil’s Night, the spell will be complete, unless Anya—with the help of her salamander familiar and the paranormal investigating team—can stop it. This time she’s risking everything: her city, her soul, and a man who sees and accepts her for everything she is. Keeping all three safe will be the biggest challenge she’s ever faced.

My thoughts:
I do love a good sidekick and this book had such a good one. A salamander named Sparky who chased cats and licked toasters cos he likes electricity.

But to the book then. Anya can see ghosts and eats them. Well the bad ones as she does not always feel good afterwards. She is a Lantern. She was not kick-ass but at the same time she was. She was more protective kick-ass. A former firefighter turned fire investigator. To serve and protect. That is who she is. She loves this city.

The story is about her chasing after an arsonist. Can I say more? Well it has darker undertones and here we learn so much more about this world. Demons, ancient mythology, dragons. It's really interesting and we also learn more about Anya. As she does not know much about her gifts, or curse.

I have book two so I will read it, I actually started it first by mistake, oh bad me, so I quickly started book 1 instead ;) But book 2 seemed good too.

Conclusion:
A good world, interesting story and characters I'd like to learn more about. It felt like a solid beginning to a series.